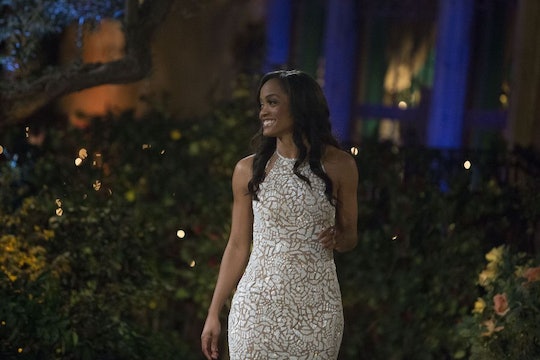 This year's Bachelorette Rachel Lindsay entered the mansion with a mind-boggling 31 suitors, but, according to her ABC bio, whoever wins her heart has to compete with the two men already in her life. One is her baby nephew Alistair (very cute, 10/10 would recommend you stalk her Instagram for photos of him), and the other is Rachel's dog Copper Ash. Fans caught a few glimpses of Copper on the season premiere, because she brought him along to Los Angeles with her and he lived in her private suite during filming. So what kind of dog does Rachel have? There's no definitive answer, but she has a good guess.

Copper Ash is a two-year-old rescue Rachel adopted, so he's a mixed breed pup. (He only made his Instagram debut this past January, so it seems like she may have just recently adopted him.) Rachel thinks he's a Finnish Spitz and German Shepherd mix, according to his first Instagram photo, but whatever he is, he's fluffy and adorable, which is really the most important of his characteristics. In the season premiere, we see him romping around with Rachel playing in their new digs, and later, loyally watching her put on her gown for the first night's cocktail party. (He definitely seems like the protective type and it is very important to have a moral support system on a show like this.)

Hopefully, Copper will get to join Rachel on a few cute one-on-one dates. After all, whoever she winds up giving the final rose to will have to gel with her whole family, right? Plus, is there a bigger red flag that a relationship is doomed than a potential partner not liking your dog or vice-versa? On a sadder note, Copper will probably also be there for her during some of her more difficult eliminations, comforting her through the stress of multiple breakups a week. I'm betting we'll see at least one tearful cuddle session between them before the season is out.

If Copper comes along for the entire journey, international travel and all, he's poised to be the runaway star of the show, à la Tiara and her chickens. I am already deafened by the forthcoming "awwws" of the audience when producers trot him out during Rachel's "After the Final Rose" special. You can stay tuned to The Bachelorette, which airs on Monday nights at 8 p.m. ET on ABC to see more of Copper Ash and find out who his new dad will be!