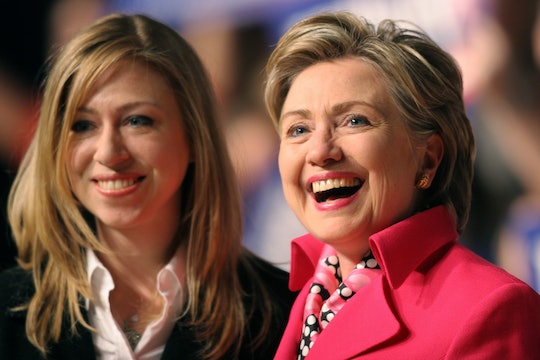 What Kind Of Mom Was Hillary Clinton? Her Daughter Speaks Very Highly Of Her

Hillary Clinton is not only the presumptive Democratic presidential candidate, but she’s also a mother to her daughter Chelsea and now a grandmother of two little ones. She’s both loved and loathed by the public for her political career, but what kind of mom was Hillary Clinton? Her daughter has described the former Secretary of State as a busy career mom with a thick skin for criticism and negativity who has taught her a resilient can-do attitude.

In an interview with Entertainment Tonight back in May, Chelsea revealed what it was like to have a mother in the political spotlight and how her mom handled it all.

"I think for better or worse, I don't remember a time when she wasn't being attacked by people who didn't want to see her succeed -- whether she was fighting for early childhood education in Arkansas, or universal healthcare in the 1990s -- so I think I'm quite accustomed to her being under attack," Chelsea said in the interview with Entertainment Tonight aired just before Mother’s Day. "And I know she never forgets who she's fighting for or what she's fighting for. I'm more concerned about how I'll explain it to my daughter. I'm more focused on that because I know my mom can take care of herself."

Chelsea has been very active, vocal, and one of her mom’s top supporters during the former first lady’s presidential campaign.

"I think my mom's extraordinary in so many ways, and I'm completely biased toward her," Chelsea said in the same Entertainment Tonight interview.

Even though her daughter speaks remarkably highly of Clinton's mom experience — yes, it might a bit intensified for election season — Clinton had to figure out motherhood just like everyone else. While she is a veteran now with two grandchildren, Clinton shared a story about how hard it was to figure things out when Chelsea was a baby in a campaign video released in time for Mother's Day.

"When Chelsea was just a really little baby, and she was crying and crying all night, I couldn't figure out what to do and I was getting really upset and frustrated," Clinton said in the campaign video. "So I was holding her, and I was rocking her, and I said to her, 'Chelsea, you've never been a baby before and I've never been a mother before. We are just going to have to work this out.'"

Looking at Clinton's relationship with her daughter in the past and now, it's clear that even when she was busy in the political spotlight she was also an involved, yet hardworking kind of mom.

Chelsea admitted again that she's an "unabashedly, deeply biased, proud daughter" when she took over Clinton's Instagram in February. But, hey, who isn't isn't a little biased when it comes to their mom?