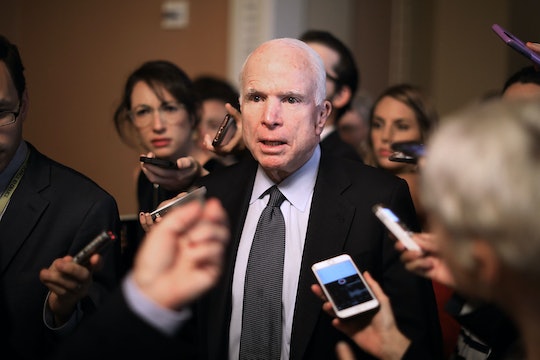 What We Know About John McCain's Surgery

Imagine this: Millions of people losing their insurance over the next 10 years and medical programs that save lives facing major budget cuts. While this sounds scary, it could the new reality in a few weeks — if the Senate health care bill is passed. Those who will be affected by the bill have been anxiously waiting for the bill to come to a vote, but now they will have to wait a little bit longer. On Saturday, Senate Majority Leader Mitch McConnell delayed the vote due to Arizona Sen. John McCain having to undergo surgery. But what kind of surgery did John McCain have? And how long will it be until the bill is brought to a vote?

On Friday, McCain had to have surgery after doctors discovered a blood clot above his left eye during a routine physical, according to BuzzFeed. McCain underwent a "minimally invasive craniotomy" to remove the 5-centimeter blood clot, according to a press release from his office. A minimally invasive craniotomy, according to Johns Hopkins Medicine, involves doctors making an incision within the eyebrow to get to and remove the blood clot. It has a faster recovery than a craniotomy and leaves minimal scarring behind. This surgery will involve a week-long recovery process, during which McCain will rest up in his home in Arizona.

McConnell made the decision to delay the vote in lieu of McCain's recovery, sharing the following statement on Twitter Saturday night:

Elaine and I, along with the entire Senate family, wish John the very best and wish him a speedy recovery. There are few people tougher than my friend John McCain, and I know he will be back with us soon. Our thoughts are with Cindy and his family, his staff, and the people of Arizona. While John is recovering, the Senate will continue our work on legislative items and nominations, and will defer consideration of the Better Care Act.

But the exact date of McCain's return is unclear, according to NBC News, which makes the future of the Senate health care bill even more of a question. 50 votes are needed to pass the bill and two Republican senators have already stated that they will not support it. McCain's support for the bill is vital for the bill's passing, although he has never been especially confident about it. Just one week ago, during an appearance on CBS' Face the Nation, McCain said he thought the bill would fail — though, he added, he had been proven wrong on bigger issues in the past. "My view is that it probably is going to be dead, but I've been wrong," McCain joked, adding, "I thought I was going to be president of the United States."

Even with McCain's support, according to The Hill, it is not entirely clear if McConnell can put together the 50 votes for the bill. For now, the legislation's fate remains largely uncertain.