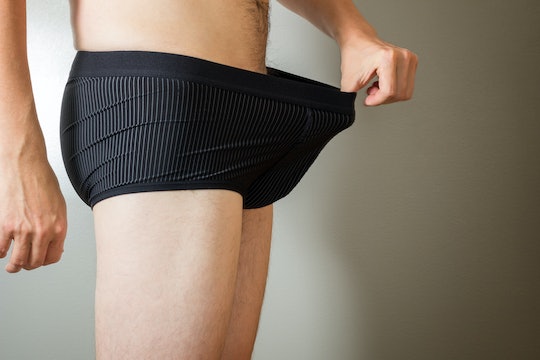 Here's How Men's Underwear Affects TTC, According To Science

Boxers or briefs? Boxer briefs? Commando? Men's underwear is not something I give much thought to unless I'm stealing my husband's to sleep in. But for couples who want to have a child, it can become a topic of discussion. Is your man's choice of underwear important when it comes to sperm quality? What kind of underwear should men wear when trying to conceive?

Semen is a funny thing. According to The Journal of Reproductive Biology and Endocrinology, spermatogenesis, or the generation of sperm inside the testes, is a fickle process heavily influenced by external factors. Things like weight, diet, alcohol and drug use, sleep, occupation, and yes, clothing, all help determine the strength and the motion of the sperm.

Concerning spermatogenesis and clothing, there is a problem called testicular heat stress that can adversely affect the motility, count, and shape of sperm in the semen, according to the Journal of Fertility and Sterility. Normally, a man's bits are pretty good at self-regulating their heat, according to The Journal of Male Infertility, but just a little external pressure is needed to throw them all out of sorts, heat wise. (This must be why my husband whines so much when I set the thermostat up a few degrees when he's looking the other way.) If their stones are so sensitive, what kind of underwear should men wear when trying to conceive?

There is no paucity of research done on this subject. In fact, there have been multiple studies completed. The most recent study completed in 2012 showed that yes, it does matter what underwear a man wears when it comes to his sperm, with boxers being superior to briefs. However, the studies have been fairly small, with under 100 men per study, leading some researchers to argue that it's actually not that big of a deal because they show that the effects aren't long lasting, noted Men's Health.

However, in the interim when you're trying to conceive, Winchester Hospital noted that it wouldn't hurt to switch from briefs to boxers — although it might not help, either. The biggest factor that affects the quality of sperm is weight and blood pressure, according to the National Institutes of Health, but if those are good, and you're still worried, maybe switch to boxers — or buy those super breathable boxer briefs.