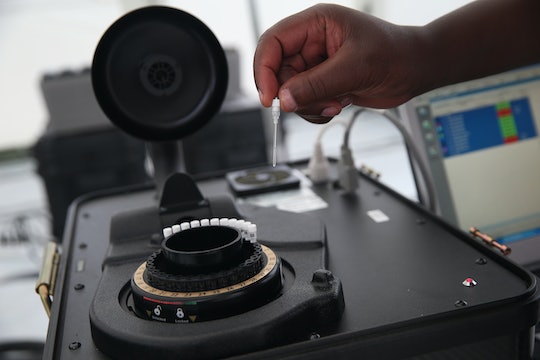 What Kinds Of Drugs Treat Zika? They Might Already Exist

Although there is no vaccine for the Zika virus yet, there are certain kinds of drugs that can potentially treat Zika, according to researchers. Time is everything right now, since there are already locally reported cases of the virus in Florida, Puerto Rico, and throughout Latin America. Some doctors even believe that there are drugs existent in the marketplace currently that could help prevent the virus from causing brain deficiencies in fetuses of Zika-infected women instead of spending years and millions of dollars researching new ones.

According to a study published in the journal Nature Medicine, researchers from John Hopkins University proposed that Niclosamide, an FDA-approved drug that also goes by Niclocide might work. It's been used for over 50 years to treat worm infections and it is generally "well tolerated" in pregnant women, according to their research.

The chemistry is complicated, but basically, the drug stops Zika from replicating. Niclosamide works "in the gut," Hongjun Song, one of the lead researchers at John Hopkins said. They don't know yet if it will work in the brain, which is where Zika seems to be causing the most damage.

So Niclosamide might be better as a component in a cocktail of drugs that Zika patients can take with two other drugs, which in turn would prevent any harm to the pregnant mother while stopping the spread of Zika to a fetus.

The second drug is called Emricasan and it's in the midst of being evaluated in clinical trials to reduce the effects of hepatitis C. That, mixed with Niclosamide and a third drug, just named PHA-690509, could do the trick, according to their research. All of them work in the way the doctors want, at least inside a lab, to combat the spread of Zika in a human. "We don't know if they can work in humans in the same way," Song told NBC. Regardless, the doctors' quick findings are a good sign, especially when compared to the often slow pace of medical research, which usually takes a lot longer than patients would hope when it comes to finding a treatment for something like Zika.

For most people, Zika is pretty harmless. The symptoms of the virus aren't fatal and usually consist of a fever, rash, and achey joints that pass within a week. But Zika has been linked to neurological disorders in infants, so pregnant women and their partners are most at risk. That all three of the drugs the doctors are experimenting with have been proven to be safe in pregnant women is a very big step.

President Obama has requested $1.9 billion to combat Zika in the United States, but the bill has been held up in Congress as both parties bicker about the details. The Centers for Disease Control and Prevention reported this week that it would run out of money for further research this fall. That Zika research is ongoing is a good thing, but it might not last. Now, it's all about hoping that more support goes to finding out if this cocktail will work or not.