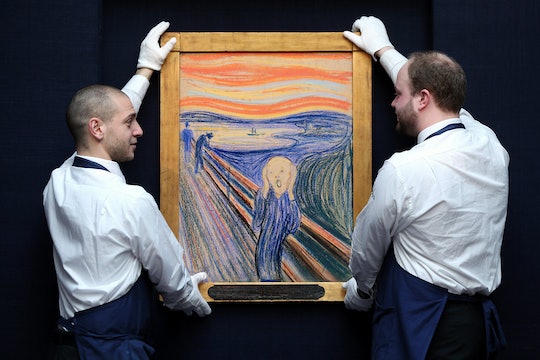 What Life Without The NEA Would Really Look Like

By now, most people have likely heard about President Donald Trump's new budget proposal, in which he plans to cut or completely eliminate funds to nearly 50 very important agencies and programs. You'd be hard-pressed to find someone who's not outraged about the cuts to Meals on Wheels or the Corporation for Public Broadcasting, but some agencies' functions are less well-known. Many people don't realize what life without the National Endowment for the Arts would look like, and it's actually a pretty big deal.

So the NEA gives money to artists, right? Like some struggling painter guy who lives in a loft and paints bowls of fruit? Sure, they do that. But that's not all they do, not by a long shot. The NEA describes itself as "the only funder, public or private, that provides equal access to the arts in all 50 states, the District of Columbia, and U.S. territories." While it does provide some individual grants, it also funds organizations, and 40 percent of its budget goes directly to the states, where local agencies dole out the money. Current NEA funding accounts for just .004 percent of the federal budget. Giving all its funding to the Department of Defense would increase that agency's budget by a whopping .025 percent. It literally wouldn't even cover one jet.

But does your average Joe even benefit from the NEA, or is it just a welfare agency for lazy poets? What would life be like if it didn't exist? Indulge me in this It's a Wonderful Life-style fantasy of Trump's dream come true:

It's a Saturday. You wake up a little late, excited for a lazy day of relaxing. Maybe you'll go out later, but definitely not to an art museum, because you're not into art. You turn on the TV hoping to catch a rerun of your favorite movie, Sister Act, which is always always playing on cable. Not anymore. Alice Walker never received her NEA grant, couldn't afford to complete her first novel, The Third Life of Grange Copeland, and never got around to writing The Color Purple. That means the movie was never made, and Whoopi Goldberg never became a star. She's still a bricklayer in San Diego.

Something feels... familiar, but you can't quite put your finger on it. Who else woke up in an alternate reality where something didn't exist? Did it happen in a book you read at Chicago State University when you were studying English with Professor Kanye West, who never got inspired to become a rapper, never dropped out of college, and ended up following in his mother's footsteps? You don't realize that you're living out the plot to It's a Wonderful Life because you've never seen it. It was shot on nitrate-based film stock that disintegrated sometime in the 1960s, because the NEA wasn't there to preserve it. You've never seen any movie that was made before 1951, in fact.

You decide to go out for a bite. Your hometown of Oklahoma City is a sad echo of what it once was. After the 1995 bombing, the NEA wasn't there to step in with architects (hey, those are artists!) and help rebuild. You pass a homeless veteran at the corner and give him a few bucks. He came home with PTSD and the NEA Military Healing Arts Partnership wasn't there to help him. His brothers and sisters in arms can't afford to take their families to museums without the Blue Star Museums free admission program. The ones they lost are forgotten, because there is no Vietnam Memorial. Lucky for you, you're not a vet.

You go into a restaurant, where your server is Misty Copeland. She never got to study dance at the Boys and Girls club, and of course the American Ballet Theatre doesn't exist. As you leave, you bump into Luciano Pavarotti on the street, whom you don't recognize, because Live From Lincoln Center also ceased to exist. You've never heard any classical music, but you're fine without it.

It's evening now, and you head back home, eager to listen to "A Prairie Home Companion," like you've done every Saturday since you were a kid (your parents are kind of nerdy). Of course, there's no NPR, but the show is still on Sirius. Oops, no it's not; it was canceled decades ago due to lack of funding.

How about some music, then? You go to your record collection and it seems much smaller. The Apollo Theater was forced to close without NEA funding, and most of your favorite musicians and comedians, from Michael Jackson to Dave Chappelle, never got their big break. The only actors, singers, and comedians left are the ones with rich parents, like Lana Del Rey or Nick Kroll. Most people can't afford a private arts education.

You furiously start flipping though the radio stations, looking for anything you might recognize. Carly Rae Jepsen's "Call Me Maybe" comes on. Being from the Midwest, you've never heard a violin before. You have a heart attack and die.