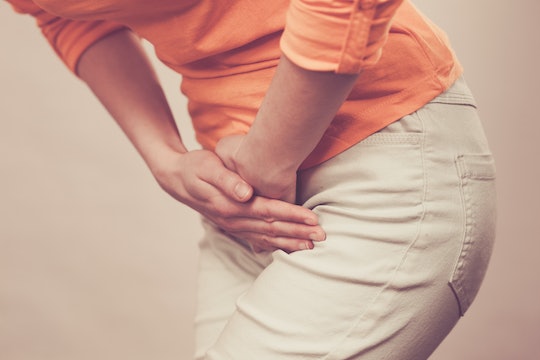 What Lightning Crotch Before Ovulation Can Mean, According To An Expert

Romper spoke with Dr. Sonia Bahlani, a pelvic pain specialist, to figure out what lightning crotch has to do with ovulation and what you can do about it.

As you may have guessed, "lightning crotch" is not a scientific term, but it very accurately describes the sharp, sudden, electric jolt of pain that can be felt either inside your vagina or in your general pelvic region. Unfortunately, doctors aren't exactly sure what causes this unfortunate sensation, or why it happens in some people and not others. They do, however, have an actual scientific term for the phenomenon: "vulvodynia." This describes any chronic pain in the area of the vulva without a specifically identifiable cause.

Many women will notice this more during pregnancy. WhatToExpect.com suggests that this may be due to the fact that your baby is getting bigger and bigger, and causing everything to press down more and more on your pelvic floor. In and of itself this isn't terribly pleasant (I've birthed two enormous babies, so I speak from experience), but in some people (again, for reasons we're not perfectly clear on) that pressing may wind up being directly on a nerve.

OK, so that makes sense during pregnancy. But what about those among us who aren't gestating but still feel as though our fanciest bits are getting zapped? And is this feeling linked, as many sufferers suspect, to ovulation?

"It's kind of hard to determine ovulation unless we're actually doing an ultrasound and see a patient ovulate," Dr. Bahlani tells Romper. "Do I commonly hear patience say it occurs during the time they should be ovulating? Yes."

According to Dr. Bahlani, a lot of people do notice lightning crotch during pregnancy, too, but many of her patients do experience it without being pregnant. "Some are even post-menopausal. It doesn't necessarily have to be related to pregnancy," she says. She points out that specialists in her field have a few theories as to why this occurs, and why pregnant people might be especially susceptible.

It's almost like the pelvic floor muscles have almost a reflexive response and contract a little bit more. It's a neuromuscular phenomenon.

One theory is hormonal changes, which explains why women can be feeling this pain during pregnancy or during the time they expect to be ovulating.

Another theory is that the pelvic floor experiences muscular changes around the time of ovulation. "The muscles can often shorten during certain time-frames," she says. "It's almost like the pelvic floor muscles have almost a reflexive response and contract a little bit more. It's a neuromuscular phenomenon."

Dr. Bahlani points out that there just isn't enough data to really have a clear view of what's going on (yet), but that all is not lost. While you may not be able to prevent this issue, you can work with your body to alleviate it.

"In my patients that I see, one thing they report as being very helpful, which points to a neuromuscular source of pain, is doing yoga," Dr. Bahlani says. "Anything that lengthens the muscles and causes them to elongate actually helps the nerves settle down." She also says for patients who aren't pregnant, a warm bath can help relax the muscles and, in turn, stop the nerves from frequently firing. (Pregnant women can probably take a nice soak as well, but should avoid high water temperatures.)

Trigger points are areas of muscles that are like taught bands that will release certain neurotransmitters that can actually create this sense of neuropathic pain.

Dr. Bahlani also says you should make sure you're regular. When your constipated, your pelvic floor muscles are contracting more and that can, in turn, cause lightning crotch. So be sure to drink lots of water and eat healthy, fibrous foods, like vegetables and whole grains.

But if yoga stretching, warm water, and keeping regular just aren't cutting it, pelvic floor physical therapy may be called for in order to help elongate a person's muscles to help release "trigger points."

"Trigger points are areas of muscles that are like taught bands that will release certain neurotransmitters that can actually create this sense of neuropathic pain," Dr. Bahlani explains. Not everyone has them (again, we don't know why, because science is fascinating but limited and the human body is weird AF but also pretty incredible), but for those who do, they can lead to this painful problem.

So, what does lightning crotch during ovulation mean? The truth is we don't actually have the data to be sure if it happens or what it means if it does. But the expert theories as to why it happens in general speak to the very real possibility that lightning crotch during ovulation is possible, and that there are things they can do to alleviate the pain.

More Like This
Health Officials Are Offering About 1 Million Children In London A Polio Booster
Banana Boat Sunscreen Has Recalled Products That Were Found To Contain Benzene
New York Can End Religious Exemptions to Vaccine Mandates, Says A Federal Appeals Court
Can You Have Sex With Placenta Previa? Experts Explain