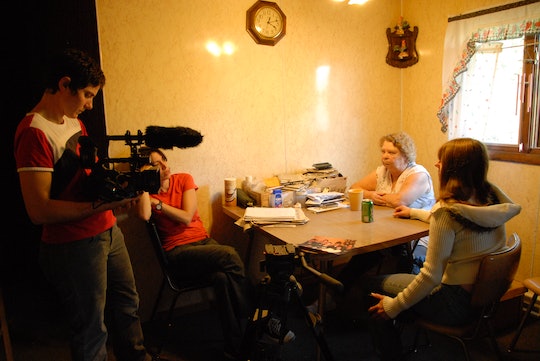 What 'Making A Murderer' Got Wrong, According To The Manitowoc Sheriff's Department

Since its debut in December last year, the country has been morbidly fascinated with the Netflix true crime drama, Making a Murderer. From elaborate Reddit threads theorizing about whether the documentary's main subject, Steven Avery, was truly guilty of the crime for which he was convicted, to White House petitions insisting on a presidential pardon for the accused, filmmakers Laura Ricciardi and Moira Demos have had their hands full with interview requests and media appearances. Also at the center of the media frenzy was the Manitowoc County Sheriff's Department, which seemed to unfairly bear the brunt of the public's criticism for its role in the original 2005 murder case documented in the Netflix series — and in an interview with Romper this week, Manitowoc Sheriff Robert Hermann finally spoke out about at least a few of the things that Making a Murderer got wrong.

"I think we’re doing rather well," Hermann said, when asked about the department's overall outlook of late. "You know there’s a level of frustration, because a lot of the information out there is twisted and turned — obviously shedding a bad light on us. But I think the community here lived through this once before, so it’s kind of déjà vu for them."

Hermann himself remembered the case well — he was there the first time Avery was arrested and then again in 2005, when Avery was arrested for the murder of photographer Teresa Halbach. "Locally, I think that the community has been supporting us [since Making a Murderer was released]," Hermann explained this week. "But you know, you’re always going to have people out there on the other side who disagree."

Specifically, Hermann said, the rest of the public's contention that the Manitowoc department's "inept" behavior had led to Avery's 2007 murder conviction was unfounded. "We were not the lead investigators on this," he said. "I guess I always think that it’s kind of ironic how people watching a film for entertainment can rush to this conclusion." He quickly added that he was "confident" that the Calumet County investigators behind much of the original trial had done the best job possible. "I stand behind them," he said.

Hermann then cited several key points from the Netflix documentary — which he insisted on referring to as a film ("I call it a film, because it doesn’t document everything like I believe it should," he told Romper) — that he claimed were wrong. Romper has reached out to Ricciardi and Demos, as well as Avery's lawyer Jerome Buting for comment and is waiting a response.

Here, a breakdown of a few of those points.

This rumor, largely circulated by social media and the national public dialogue, was without merit, according to Hermann. "You’re kind of playing off what these filmmakers were saying, like, 'We tried to have them people involved, but they didn’t want no part of this documentary,'" Hermann said, when asked about the department's relative absence throughout the filmmaking process. "Back when the hearings started with Judge (Patrick) Willis, he asked that law enforcement no longer make any comments publicly — so we weren’t able to even comment on that case at all to the press. Basically, he put a gag order on us, and obviously we didn’t want to create any problems for the judicial system, so we stopped."

Hermann said that while he and his department did eventually make comments to the filmmakers, they were purposely silent until that point. "I did speak with those filmmakers, I’m in the documentary," he said. "So, I think their claim [that we wouldn’t speak to them] is false. We legally couldn't."

According to Hermann, the account Avery's gave in the documentary of a previous animal cruelty charge was wildly "downplayed."

"He downplayed that cat incident, you know," Hermann bristled. "'Oh, when I was young and foolish'—well, he was actually about 20—'I took some friends and grabbed the cat, and I kind of waved it over the fire, and it caught fire.' No, you didn’t. You doused it with oil and then put it in the fire. So it’s all downplayed. And then when it came time to discuss the law enforcement’s [account], it was twisted."

When asked whether the filmmakers had reached out to him at the time to confirm Avery's story, Hermann said he couldn't remember.

The Averys Were Social Pariahs In The Community

Despite claims made by the Averys themselves in the Making a Murderer series, Hermann said that the family was never ostracized in the way that the documentary's audience might think.

"You know… the documentary—or film—paints a picture that they were, you know, kind of—I don’t know which name you’d use," said Hermann. "But they paint this picture of the Avery family, which I think is totally wrong. And they paint that picture themselves, too."

He stated that the department had maintained a relatively uneventful relationship with Avery Auto Salvage itself over the years, frequently employing the business' services for various roadway accidents and tow-aways. "Quite frankly, we use their facility for towing," Hermann said. "We had officers go up there and handle stuff that had been towed. [The Avery’s salvage services] were one of three agencies that would tow away disabled vehicles for us on a regular basis, and so our officers would then have to go up there and get information about the vehicles to have them impounded. You know?"

Leaning back in his chair, he then added, "They are who they are. I don’t know that they were any better known than anyone else in the community."

While not all of Hermann's grievances could explain away the more complicated plot points of the case — Brendan Dassey's unsettling confession or all of the allegedly planted evidence in particular — a deeper look into the original trial coverage recently re-posted by The Milwaukee Journal Sentinel has somewhat bridged any lingering gaps in the story. Together with Hermann's statements, the combination could possibly be enough to convince even the most skeptical of viewers that Making a Murderer, as sweeping and captivating as it was, may not have been telling the whole story.

With the Manitowoc County Sheriff's office weathering a daily barrage of anonymous phone calls and emails from the public — most of them mocking, a few realistically threatening — Hermann on Wednesday said that the swirl of damaging rumors had forced him to counsel officers to be extra vigilant.

"You see some of these threats, the things in the emails," he said. "We've told them to be more aware of their surroundings. So it has changed things a bit."