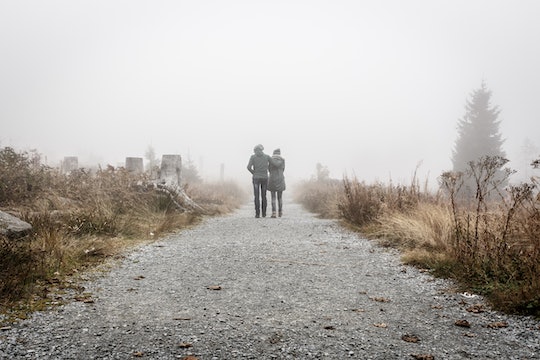 What Mary Weiland's Essay Meant To Me, The Partner Of An Alcoholic

On Monday, December 7 Rolling Stone published a letter written by Mary Forsberg Weiland, and her two teenage children, Noah and Lucy, about the death of her ex-husband — and their father — Scott Weiland (best known as the lead singer for the Stone Temple Pilots). Mary Weiland's essay asked the media not to glorify her ex-husband's death and its intention was clear, at least to me: It was written to convey the painful truth about addiction, to bring awareness to the disease, and to bring attention to the way we — as a society — enable those who are sick. The way our ignorance perpetuates suffering. It was written to help a family grieve — to help them try to make sense of a tragedy, a tragedy they have been enduring for numerous years — and while I do not point fingers, and I am not in any way implying society is to blame for Scott’s death, I was moved by Mary’s message. It was bold and brave, but not everyone agrees. Many commenters bashed her for sharing this letter “too soon,” some had called her a pissy, whiny, and “bitter ex-wife,” and others have called her “disrespectful.” Others have accused her of destroying her children’s lives, of poisoning their memory of their father.

Wow. I knew I shouldn’t have read the comments.

I began dating my husband we were just 17 years old. (We were highschool sweethearts.) I was a shy, socially awkward young girl — a girl who loved singing and poetry and Leonardo DiCaprio — and he was very much my mirror, though his love lay with wrestling, not Leo. We supported one another, we cared for one another, we came to love one another, but the trouble started when we tried to save one another.

It was in high school I first saw him drink. It wasn’t in excess; it was a social thing, a party thing. It was about breaking the rules. It was about “cutting loose and kicking back,” and it was about being “better” versions of ourselves — fun, outgoing, and uninhibited, or so the alcohol led us to believe.

When we went to college, the party continued, and when we turned 21 all bets were off. We would go out for drinks after work, and continue drinking when we got home. It was the thing to do. And, for a time, we were having fun. We were young and stupid. We were “drunk and in love.” (Like Mary, I enabled my “addict;” I drank with him. I drank beside him. I protected him. And I lied for him. I am not proud of this, but it is the truth — an important truth.)

But after a while — after a few years of binge-drinking and blackouts — it stopped being fun, at least for me. Clubs and bars and beer festivals wore out their welcome, and I found myself much happier curled up on my couch watching Family Guy reruns or reading a book then heading out to Whiskey Tango, or into the city. The difference between me and my husband was that I could stop. I could go without drinking, or “just have one.” He couldn’t. There was always an itch he needed to scratch, a hole he need to fill (and he was compelled to fill that in the only way he knew how: with booze).

Addiction lies to you. It manipulates you, and those around you, and it makes you do stupid things, delusional things. Things you think are helpful prove to be just as sick. It tells you you are in control — and it forces others to believe it too. But after 10 years of asking him to stop, begging him to stop, trying to trick him into stopping, I was just as sick as he was: He was sick from alcoholism, and I was sickened by effects of co-dependency. I believed if I watched him drink — if I accompanied him while he was drinking — I could keep tabs on his drinking; I could stop him from drinking. I would check the clock before he opened his beer and count the minutes before he got up to get another. I’d suggest he “take it easy.” My illness became just as insidious as his.

To live with an addict feels like you are drowning. Every day you fight to take a breath, but every day the proverbial sh*t is kicked right out of you. You flail and fight but get nowhere. You give it your all but you are barely treading water. You are barely staying alive.

I fought because I had to. I knew the good person, the smart person, the sweet person he was. I saw past the sickness and into his soul. I saw the boy he was and not the man he became. Eventually, though, even hope wasn’t enough. I came to believe his drinking was my fault. I was failing him — as his friend, and as his wife. I couldn’t stop him. I couldn’t save him, and the guilt became more than I could bear. Instead of leaving, I considered suicide because I wasn’t strong enough to leave; I wasn’t strong enough to give up — which is what I believed “leaving him” meant, it meant I was giving up on him and any chance he could get better.

Instead of suicide, we started a family.

Is this sick? Probably, but part of me hoped a baby would change him. He always said he wouldn’t drink around a child. He wouldn’t — and couldn’t — do that to a kid. If a baby could save him, maybe there was hope. Maybe I didn’t have to watch him die.

And she was the motivation, sort of. Just after my daughter’s first birthday, my husband found himself in a “day after” stupor again. He found my wedding band on the end table beside him. He heard me tell him the words I’d been saying for years, I couldn’t do this any more. I was leaving. But this time it was different. There was more at stake — for me, and for him — and he couldn’t take anymore. He didn’t want to do it anymore.

He surrendered. He admitted he was powerless over alcohol, and today we are one year sober and counting.

That said, addiction is a lifelong disease. The effects of his alcoholism still linger, the lies of his disease still linger, and there are no promises for tomorrow. There are no guarantees. Today I am lucky, because my husband could have been Scott. He could still be drinking. He could be my ex, and almost was. He could have died. And while we are better — better than we’ve ever been — we’re still repairing the damage done by this disease. We’re still working to build up faith and hope, trust and — some days — even love.

The cold and callous reality of this disease is that the things he cannot recall are the same things I cannot forget — and I remember everything. But I write this not for my family or for Mary or even for Scott’s enraged fans — the ones bashing Scott’s ex for trying to come to terms with tragedy in the only way she knows how — I write this for all of the other women and men and children living in the shadows of addiction. The people being swallowed by a disease they don’t have and don’t understand. I write this for every enabler who feels unbearable guilt, for every spouse or parent who feels hopeless, and for every child who thinks they are alone.