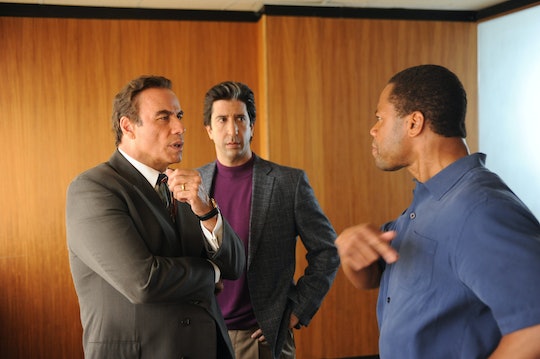 What Medication Was O.J. Simpson Taking During 'The People v. O.J. Simpson: American Crime Story?' The Answer May Be Important To The Trial

Blink and you might have missed the few moments that the series pans the camera to a pill bottle (even though the camera shots themselves prove the series is clearly foreshadowing something). But, while speaking to his counsel, Robert Shapiro (John Travolta), and friend-turned-defense lawyer, Robert Kardashian (David Schwimmer), a stressed-out Simpson (Cuba Gooding, Jr.) can be seen aggressively swigging from the bottle.

The premiere, however, never goes into detail about what exactly the medication is. But we're only at the premiere, people — The People v. O.J. Simpson still has nine episodes to flesh out every foreshadowed detail. But those who watched the Trial Of The Century as it was unfolding (instead of its recreation on FX) might connect it with one key piece of evidence during the trial. What piece of evidence? Why, the most famous piece of all: the glove.

Even if you didn't watch the trial in 1995, you probably at least can quote the most famous line of Simpson's trial, spoken by Simpson lawyer Johnny Cochran: "If the glove don't fit, you must acquit." And, after a jury watched a glove found at the scene of the double murder not fit Simpson, they did, in fact, acquit.

The prosecution, however, cried foul about the glove (which, as viewers saw Tuesday, got its own special cutaway scene in The People v. O.J. Simpson). Deputy District Attorney Christopher A. Darden claimed at the time that the glove was too small for the football player because of Simpson's medication. During a sidebar, Darden said, "Mr. Simpson has arthritis and we looked at the medication that he takes and some of it is anti-inflammatory. And we are told that he has not taken the stuff for a day, and it caused swelling in the joints and inflammation in his hands." (For what it's worth, Cochran, in response to the accusations, said "My dear friends are being paranoid"; Simpson's current legal team has not responded to Romper's request for comment regarding the accusation that he didn't take the medication and that the glove would have fit him.)

Author Lawrence Schiller, author American Tragedy: The Uncensored Story of the O.J. Simpson Defense, seemed to echo Darden's claims during a 2015 interview with ABC News. According to Schiller, Karadashian said Simpson ceased taking the pills "one month" prior to the famous trial moment. Whether that was intentional, or whether that even led to the glove being too tight might never be known.

This, of course, is a different explanation than the common one spread during the 1995 trial as to why the glove might have been too snug — prosecutors also claimed the glove shrunk because of the soaked-up blood.

Still, as those watching saw, the glove did not fit. And Simpson was eventually acquitted, even if he lost a civil suit in connection with the murders (and ended up in jail after being found guilty of armed robbery and kidnapping in Las Vegas in 2008).

Whether American Crime Story will focus on the pills as a key piece of evidence remains to be seen for viewers, and it still leads to the same question we started with: Did he do it?