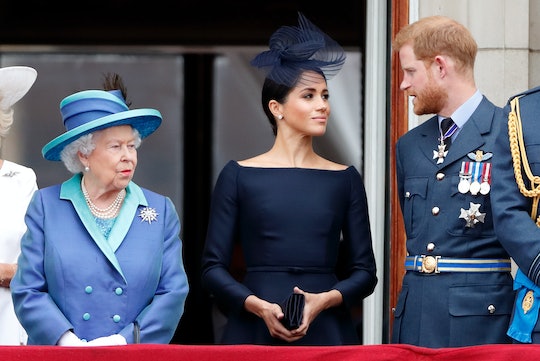 The Duke and Duchess of Sussex left fans and the media stunned Wednesday when they announced plans to carve out what they called "a progressive new role" within the monarchy. Along with stepping back from their roles as "senior" members of the royal family, the couple said they aimed to become financially independent. The news has caused many to wonder if the pair are planning to venture into new avenues of work and if so, what might Prince Harry and Meghan Markle's careers look like outside of the royal family?

"We intend to step back as ‘senior’ members of the Royal Family, and work to become financially independent, while continuing to fully support Her Majesty The Queen," the couple announced Wednesday on Instagram. "We now plan to balance our time between the United Kingdom and North America, continuing to honor our duty to The Queen, the Commonwealth, and our patronages."

In stepping back as 'senior' members of the Royal Family, Prince Harry and Markle will no longer receive funding through the Sovereign Grant, the government's annual payment to the monarchy, according to an explainer on their official website. This will, in turn, allow them to become members of the Royal Family with financial independence, which a statement on their website claimed was "something they look forward to."

"The Duke and Duchess of Sussex take great pride in their work and are committed to continuing their charitable endeavors as well as establishing new ones," a statement on the Duke and Duchess of Sussex's website read. "In addition, they value the ability to earn a professional income, which in the current structure they are prohibited from doing. For this reason they have made the choice to become members of the Royal Family with financial independence."

While no details have been shared regarding what Prince Harry or Markle might do for an income, the explainer on their website stated they ultimately aimed to have "future financial autonomy to work externally." That means the new working model they're pursuing could theoretically see them pursue book deals, paid speaking engagements, or even become spokespeople à la the Duchess of York.

Already the couple are involved in Sussex Royal: The Foundation of the Duke and Duchess of Sussex, which launched last year following a split from the Royal Foundation Prince Harry previously ran with his brother Prince William and his wife Kate Middleton. They have since filed a trademark on the name, a move Harper's Bazaar has reported is fairly common among members of the Royal Family. On Wednesday, however, the royal couple also said they would launch "a new charitable entity" as part of their next chapter.

While it seems certain that Prince Harry and Markle intend to take on work outside of their royal duties, it's too early to know exactly what those careers will look like. But although details are scant now, the couple said Wednesday that they looked forward to sharing "the full details" of their next step "in due course."