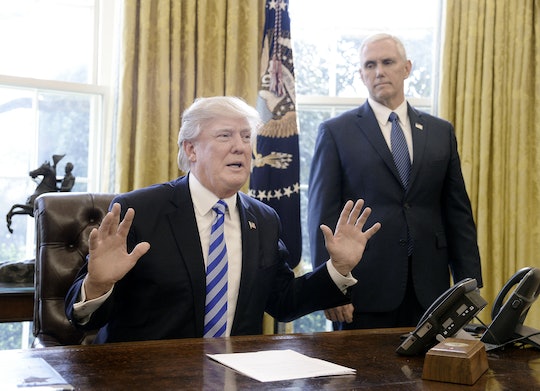 What Moms Need To Know About The New AHCA

President Donald Trump's vow to repeal and replace the Affordable Care Act was expected to be one of his top priorities after taking office in January, but only a day away from his first 100 days in office, it's evident that the GOP's proposed American Health Care Act remains controversial. According to Politico, a draft of the latest amendment shows that the GOP is attempting to push its plan through once again, but voters might not be pleased — especially women. Here's what moms need to know about the new healthcare plan, because if it passes, the restrictions could hit pregnant women and new mothers particularly hard.

Republicans first announced their long-awaited Obamacare replacement plan earlier this year, but it didn't exactly go over well. Though Trump had initially promised a healthcare plan that would ensure "insurance for everybody," according to Reuters, it quickly became clear that that might not actually be the case. In March, the Congressional Budget Office found that, while the plan might save the government money, it would likely result in as many as 24 million more Americans being left without insurance coverage by 2026. Congress was set to vote on the bill in March, but a lack of support for the bill itself led the GOP to pull it at the last minute. Now, a new version has been designed in an attempt to shore up party support, but it doesn't exactly appear to be good news for the average American.

How is the new plan different? For one, the amendment would allow states to weaken some key Obamacare provisions, including those involving pre-existing conditions, according to CNN. While the author of the amendment, New Jersey Rep. Tom MacArthur, said that states would not be allowed to waive the ACA's requirement that insurance companies are prohibited from denying coverage to anyone based on their health history, the amendment would allow insurers to once again charge much more for coverage due to pre-existing conditions, or to offer only very basic policies that wouldn't actually be very helpful based on their needs.

But even if they don't have complicated health issues, women could still lose out: in the past, insurance companies could also consider pregnancy to be a pre-existing condition, but under Obamacare, no insurance carrier can refuse coverage to a pregnant woman or charge her more because of it, according to Healthcare.gov. Furthermore, thanks to Obamacare, a woman's pregnancy and childbirth are guaranteed to be covered from the day her insurance plan takes effect, even if her pregnancy began prior to that point. If the AHCA passes however, states could allow insurers to charge pregnant women more for coverage, potentially leaving women at risk of being uninsured.

Another important difference, according to The Washington Post, is that the new amendment also would give states the ability to opt out of offering coverage for what the Affordable Care Act deemed to be "essential health benefits." Under Obamacare, all marketplace health plans must cover certain services, including emergency services and hospitalization, prescription drugs, rehabilitation services, laboratory services, and mental health and substance abuse services, according to Healthcare.gov.

Another essential health benefit guaranteed under the ACA? Pregnancy, maternity, and infant care. That's a big deal for anyone who has been pregnant, or might become pregnant in the future, (even in a straightforward, complication-free pregnancy, medical care can be expensive). Yet if the AHCA passes based on the most recent amendment, states could ask for federal approval to waive the requirement to cover those essential health services. In other words, even if you had an insurance plan under the AHCA — which would technically contribute to Trump's goal of offering healthcare to everybody — and even if you could afford the potentially-higher rates your insurer may be able to charge you because of your pregnancy, your prenatal care and delivery might still not be covered.

It's not entirely clear whether the AHCA will pass though, even with the current amendment. According to The New York Times, while the GOP appeared to be hoping for a vote Friday — just in time for Trump's "first 100 days" cut-off — Republican support for the bill is reportedly still low, and a senior House aide said late Thursday that the vote wouldn't be happening. If all members vote, The New York Times noted that the bill wouldn't pass if more than 22 people oppose it. Currently, experts estimate that "at least 18 House Republicans oppose the latest version" of the AHCA, so for now, it appears the GOP has chosen to wait it out.

Although Obamacare is certainly far from being a perfect program, the protections it offers for those with pre-existing conditions, and the coverage it guarantees for costly, yet necessary, medical services is significant and valuable. Trump and the GOP may argue that their replacement plan is more affordable, and that it technically still ensures that Americans could get coverage, but it also seems pretty clear that there are number of major loopholes for states that would mean the options people are actually left with might not entirely be all that great. While offering choice and affordability is important, having options doesn't seem to mean much at all if the plans you are eligible for don't cover what you actually need them to.