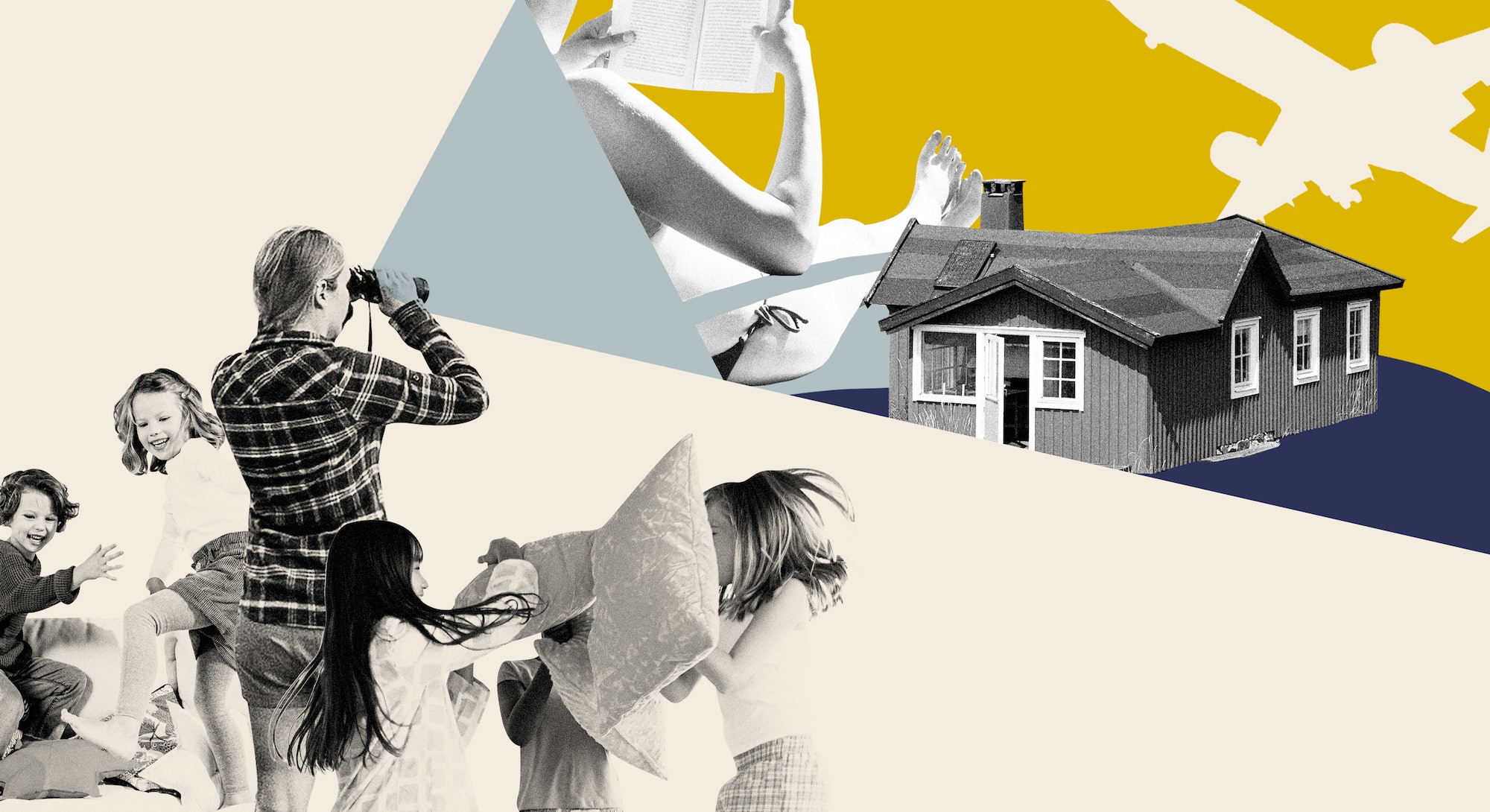 How Moms Plan To Escape When The Pandemic Ends

What do our fantasies say about us? A lot.

For those who have measured the pandemic in angry moon cycles and emptied bottles of wine, one topic remains fixed in our minds as motivator and balm: what we will do once this is all over. Without our kids. Or partners. Attending an Orangetheory class with the girls and getting an iced coffee afterward just isn’t going to cut it after months of domestic labor, Zoom schooling, and existential and political angst. We’re blowing it out. “I earned this!” we will scream as we strap ourselves into some type of vehicle or projectile and launch off somewhere we can be where we can be massaged and glossed and fed and left alone.

Via social media and a few listservs, I asked hundreds of other mothers across the country what their ideal post-pandemic no-kids vacation looks like, and hopes are pinned on destinations near (Target) and far (the other side of the planet). Like a Rorschach test, the escapes being plotted by America’s moms may reveal something about what we are mourning. I have a theoretical trip to Anguilla on the far side of all this that is less about the white sand than the moment our hosts pick us up from the harbor parking lot, to-go rum punches waiting for us in our cup holders. I don’t need to visit the same beach Adele 2020 has — I just want to leave my kids at home with their grandparents and then feel excitement and frivolity once again, with old friends I can be easy and have a lot of laughs with. We can even just skip the island and go right to that feeling.

Reading through other mothers’ vacation wishes, a collage of visions begins to form a comprehensive character sketch of the mournful maternal heart in 2020. It wants solitude, it wants quiet, it wants to visit the Wizarding World of Harry Potter, and in some cases it wants acid.

Put on your neck pillow, plug in your noise canceling headphones, and flip through the yearningest travel guide you’ve ever read.

While many moms vow they’re heading directly to a five-star hotel the second the pandemic is over, others want to exchange their four walls for a starry sky. Lisa Scanlon Mogolov, an editor and mother of two in Massachusetts, wants a repeat of the whitewater rafting trip she took some years ago, only without the rafting (which gave her nervous migraines and nausea). “This year, I was planning on going up to enjoy the eating/napping/reading/enjoying nature/drinking-around-the-fire part. I cannot wait to do all that.”

Christie Klimas, a professor and mother of two in Evanston, Illinois, is an outdoors enthusiast whose travels have had to stay more local this summer. She wants to explore Canyonlands National Park or the rainforests of Oregon with a close friend. California’s redwoods figured in other fantasies — structures for whom the pandemic is a mere blip in time, not yet long enough to waste a tree ring on. Kimberly Thedford, a mother of two in Chicago, is considering part of the Camino de Santiago trail that begins in Spain. “And a dark skies trip with my friends. Someday.”

For Brittany Gibbons, a writer mom of three in Ohio, the location matters less than the camping itself. “Just a tent, some candy, and a pillow to scream into. Maybe bring along some girlfriends and their screaming pillows, you know, to realign our cycles and howl.”

Whether it’s hanging out together on the beach, road tripping, or even throwing axes together, we miss our girlfriends — often our college friends — more than anything. Maybe it’s because we yearn to be with someone who knew us when we were young and relatively unformed, or we miss the people we went on our most carefree adventures with — even if the adventures we crave now are a little more staid. “My college girlfriends and I have a tradition of getting together a couple times a year for a burger and then we stroll the aisles of a craft store for hours shopping and catching up,” says Megan Zander, a mom of two in Connecticut. “Sometimes we throw in a stop at TJ Maxx if we’re feeling wild. We group text about how we can’t wait to do this again once all this is over.”

Los Angeles’ Magic Castle figured in hypothetical travel plans, as did Broadway and the St. Lucia carnival. One mom said she and some friends are conjuring a “Ladies Spaga” trip — several days at a spa followed by a Lady Gaga concert.

Tracy Lyons, a mother of one in California, is a longtime follower of the jam band Phish (sample lyric: “I feel the feeling I forgot / of swimming weightless in the womb”), and is ready to resume that part of her life. “I do not give an F what show I get to see, as long as all my homies are there and we get to DANCE. God, I will cry buckets of tears the next time this happens.”

The Place With No People

While Hawaii, Mexico, the Caribbean, Sedona, and Europe remain fixed in many women’s imaginations, others are less choosy, as long as they can be alone. Essentially, we’d like to be witches living a life free of men on Aeaea. One mother said that a cross-continental plane ride to Australia — never mind the actual arrival — sounded pretty good. Genie Gratto, a mom of one in Oakland, doesn’t even need to get on the plane. “If I can take some wine and some books, I would be happy with the Holiday Inn Express by the Oakland Airport as long as no one talks to me,” she says.

Kristi Pahr, a mom of two in South Carolina, wants everyone else to leave. “I'd like my family to go on a trip and just leave me at home alone for like a week. Traveling stresses me out, so several days at home with no one to take care of but myself would be amazing.” Another mom plans on a silent retreat at a monastery after five months at home with four children.

“I just want a few days of no kids or animals on top of me,” says Stephanie Giardino, a teacher in New Jersey and mother of two. “Maybe poolside with never-ending frozen drinks and a good book. Nothing to clean or cook. No decisions to be made other than what I am eating or drinking next.”

Anne Connon, a mom of two in Ohio, doesn’t know when she’ll next be able to see her family, all of whom are in Canada. “The first thing I'm going to do is to get myself to Toronto. My immediate family had a big 80th birthday party there for my dad, and it affected me a lot more than I thought it would not to be there in person,” she says. (Another theme was redoing milestones: Expect to receive invites to your friends’ 40th birthdays in the future, even if you’re all a bit north of that age.)

For Ellen Sheng, a mom of two in New York, the pandemic has confirmed that life is too short to endure a Mother’s Day prix-fixe with toddlers if you would rather be somewhere else. “Why shouldn't Mothers Day be something different and for me?” She plans to salvage a planned trip to Las Vegas with her mother and sister.

“My Aikido dojo sends a group to Japan every year to train in the main dojo there,” says Ilima Loomis, a mom of one in Hawaii. “The trip was canceled this year, and it's the first thing I'm going to plan when we can travel again.”

One self-identified geek mom wanted to go with her pals to the Wizarding World of Harry Potter. Pre-COVID, Holly Scudero, a mom of two in Texas, was supposed to take a trip with two friends for a live Pokémon Go event, which would have been her first weekend away from kids since her youngest was born. “I'm desperately hoping that gets rescheduled at some point once all this madness passes, because I was so sad when it got canceled.”

Hobbyists envisioned an escape to quilt or knit or scrapbook and do nothing else. Many simply wanted time away to read and write. Pre-COVID, Portland mom of one Rachael Rider had a plan to find a motel with a pool, “somewhere in the middle of nowhere, maybe the desert, midway between me and my various adult writer friends, where we could spend a weekend and just write and drink with no distractions.” She adds, “It still sounds tits.”

The Old Way We Moved In The World

For some, the ultimate dream is a return to a life where we didn’t have to worry about harming each other just by breathing. “I want to go to the grocery store and not feel horrible for all the employees and return home and put away my groceries without disinfecting them first,” said one mother. Another pined after an itinerary that once seemed mundane and has become the most longing-filled fantasy of all: “To drop my kids off at school, then [go] to the office.”