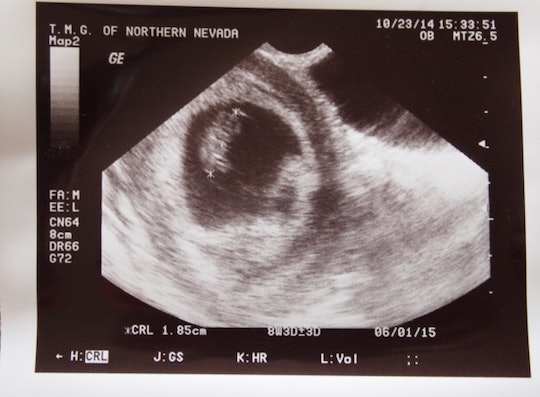 What My OB-GYN Said About My Miscarriage Haunts Me

I stared at the screen with my midwife, willing movement, searching for a heartbeat, knowing it wasn’t going to happen. I could see it on her face the moment she turned on the ultrasound: I had suffered a miscarriage. My baby was dead. She pointed at the screen and asked if I saw what she saw, and I nodded and cried. It was just a floating dot, no tiny moving arms and legs, no beating heart. I should have been 12 weeks along, but it looked like the baby had stopped growing at nine.

I scheduled a dilation and curettage (D&C) with one of the OB-GYN’s in the office, while my other two children stayed with my parents. It would give me a day to prepare and a day to heal. It wasn’t much, but it was better than the prospect of waiting around, wondering when it would happen. It gave me some small sense of control in a sea of chaos.

Even though I knew I had made the right choice, the day leading up to the procedure was nerve-wracking and horrible. In the midst of my grief I wasn’t able to remember all the information my midwife had given me. There were many medications I picked up from the pharmacy, but I couldn’t remember which I should take before the procedure, and which I should take after. I was so caught off guard when the pharmacist asked me if there was any chance I was pregnant, that all the instructions were a blur.

Was I still pregnant? What are you supposed to call that limbo when you’re waiting for a doctor to remove the baby that is no longer alive? The fetus, I guess, but medical terminology aside, it was still my baby. I couldn’t think of it any other way. In my mind, there had been a baby from the moment I took that first pregnancy test. I had imagined our future. I had felt love.

I had a dream the night before the procedure that the doctor did another ultrasound and the heartbeat was still there, clear as day. It was comforting for a moment, then my senses came back to me.

When I went back to the office, I felt blank and drained. The OB-GYN greeted us cheerfully, as if we were coming in for a routine check-up. I didn’t return the enthusiasm. I had hoped for a show of solidarity in my time of grieving, but it was clear this was just another day at the office for him. He asked if I wanted an ultrasound, and was annoyed when I said yes. He told me it was pretty straightforward from the ultrasound my midwife had done. He wasn’t going to see anything different.

I knew, I told him, but I needed the closure. The dream had left me unhinged. I knew what was coming, but there was a brief, unwelcome flutter of hope before the inevitable. He did the ultrasound. Still no heartbeat.

I struggled to regain some small feeling of control again. I wanted to know about the procedure and the paperwork I was signing. I asked about the risk of hemorrhaging; I knew it ran in my family on my mother’s side.

“It’s just like an abortion,” he said. “I do them all the time.” He told me a dilation and curettage was very low risk. There was nothing special about my situation. I would be fine. It was clear he was done talking to me; he wanted to get on with the procedure and on with his day.

I was effectively silenced, stunned by his words. It’s just like an abortion. I knew what he meant. The procedure was the same as what he would do for an early abortion. He did them often, and there was no cause for undue concern. Still, the words filled me with sorrow and guilt. Suddenly it felt like I was killing my baby, even though it was already dead. It made it feel like my baby was something unwanted, something I was eager to get rid of, even though I had wanted it so badly.

I wished I could press pause, wait just a little while longer to say goodbye, but it was too late. He started the procedure, and I sobbed and wailed. He told me it shouldn’t hurt that bad. I told him it wasn’t the physical pain, but soon it was both physical and emotional. He became so fed up with my grief and hurt that he stopped halfway through the procedure and asked me if I wanted to stop and reschedule when they could put me under. I asked him how much worse the pain would get, and he gave me a jab with whatever tool he using. I winced and told him to keep going. I wanted it to be over.

When it was done I felt empty and relieved. Then I felt guilty for feeling relieved, guilty for not wanting to carry around a dead baby, guilty for having the procedure at all. It wasn’t just like an abortion. It was like having my hopes and dreams forcibly ripped from inside my body. I needed to know that my baby mattered and that my grief was real. I hated my doctor for those careless words, for his brash reaction to my grief.

Even now, I look at my three children and those words lay heavy on my heart. It feels like no one is missing anymore, and that leaves me with complicated feelings of guilt for moving on with my life. I still feel the need to prove that it wasn’t just like an abortion, even if that means hurting forever. Because words matter, and those five words will always haunt me.

Images: Courtesy of Gemma Hartley (2), me and the sysop/Flickr