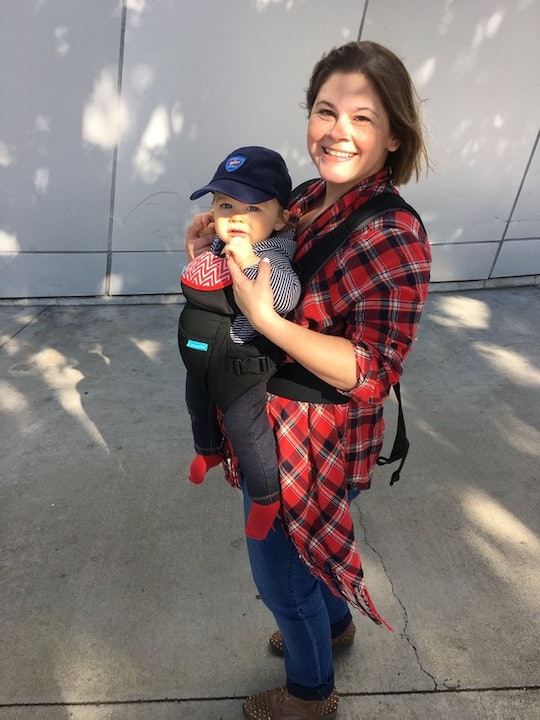 What My Rainbow Baby Taught Me About Hope

When I turned 18, I ran away from my family as fast as I could. I was the first in my family to go to college, and the minute I graduated, I ran from the country. I went abroad for a few years, trying to figure out how to become a legal resident of Italy. When that didn’t pan out, I came back to the United States, but set up shop on the opposite side of the country from where I grew up. California was totally different from my home state of Illinois.

More Like This
Here's The Deal With Babies Who Sleep With Their Eyes Half Open
Tax Day Is Almost Here: Everything You Need To Know About The New Child Tax Credit
18 Best Sand Toys In 2021 For Babies, Toddlers, & Kids
You Will Not Regret This Perfect Baby Pool From Target

I tried to mentally divorce my family. There had been so much unhappiness growing up. My father was unhappy. My mother was unhappy. One of my brothers sold drugs, while my other brother did them. My sister stayed quiet, and sad. Family didn’t mean anything but pain to me.

When I was 35, I got pregnant. It was an unexpected pregnancy at the very early onset of a new relationship. I was devastated. I had been hoping to meet a person who wouldn’t mean anything to me, and then to run away again to another corner of the world, to live and thrive and flourish the way I always had – alone. But getting pregnant complicated those plans.

At the same time, I was also temporarily living in a house with a family of two little boys and their parents — a college friend and her husband who had offered me housing. As I sat around their dinner table, and in their living room, my eyes widened. What if there was a reason people kept procreating?, I wondered. What if it really was a gorgeous way to live and a learning opportunity? I was starting to see things a bit differently. Some families were honestly happy.

I envisioned my partner and I in a home with a baby of our own. I pictured a baby that was half me, and half him. I pictured a kitchen table, and a living room, filled with sweetness and kindness and the laughter of a little baby. I didn’t feel like I wanted the pregnancy, but my nerves were tingling with the possibility that I could have a family and be happy.

Hope is a seed that we’re born with. We don’t even have to actively water it. It gets watered by way of living.

About 48 hours after I took the positive test, I started bleeding. The pregnancy had ended. Part of me felt relieved. But part of me felt completely changed by the 48 hours I had been pregnant. So we decided to live together and to marry. We decided to open ourselves to the possibility of a pregnancy. Less than a year later, I was carrying another baby.

That pregnancy was fraught with fear. I asked myself countless questions: Will it be too hard for me to raise a child? Are he and I cut out to handle this? Will I lose myself in the process of mothering? But these questions were also filled with hope, hope for a future in which I learned to love humanity differently. A future in which I understood new things, about myself and everyone around me. A future that would teach me a new way of life. A new way of making a family.

Hope is a seed that we’re born with. We don’t even have to actively water it. It gets watered by way of living.

When I lost that first baby, I also lost the chance at a life that was drastically different from the life I had initially dreamed of. But I felt at peace with that. Deep down, I hoped for a child because I wanted to get to know the world differently. I hoped to know all kinds of love, and how each kind changed you and the prism through which you view your life experiences. I hoped that my early family life wasn’t a given, and that I wouldn’t necessarily repeat the past.

Throughout my first failed pregnancy and my second successful one, all along the way, hope carried me. And it continues to carry me to this day.