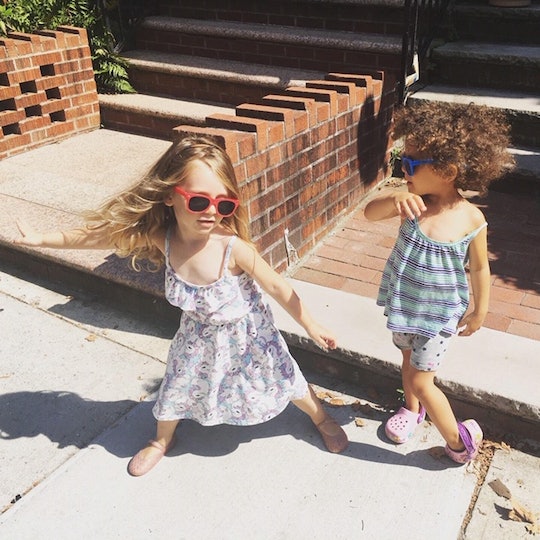 My daughter bobbed across the room like a marshmallow in a pink tulle skirt that skimmed her ankles. Her best friend, Twyla, was waiting in a pale purple gown that matched. With unusual solemnity, the girls lifted their arms, pressed their palms together, and began stepping forward and backward, an intricate dance. When Twyla’s mom Melanie finally asked what they were doing, Sofia turned to us and declared, “We gettin’ married.”

Sofia’s and Twyla’s friendship is unique by any measure, but especially for the under-5 crowd. It was love at first sight when they locked eyes across the pebbly backyard of a Brooklyn cafe, months before either of them could speak. They were barely a year, at an age where most babies can’t yet play together, let alone show preference for one another. Yet Sofia and Twyla did. In the chaos of toddler meetups, they found each other. They held one other’s shirts as they learned to walk. They fed each other Puffs. They learned to ask for one another, to communicate through laughter, play, and puppy-like wrestling.

Melanie and I encouraged their connection; after all, it’s not every day you meet a friend beside whom you can comfortably poop in the bath. And perhaps more to the point, a friend who will not judge you for defecating next to their naked body, but rather revere you.

When Twyla walks into the room, Sofia’s whole world falls away, and I can hear the love in her voice when she cries out, 'Twyla!' She lets herself be swept away, every time.

Of course, it’s not all unicorns. Sofia and Twyla are 3-and-a-half, still in the fires of toddlerdom. I’ve seen tiny fists fly over mermaid flip-flops, and tears shed over grumpy refusals to play. I’ve seen Sofia scrabble with other toddlers to snatch the toy Twyla wants to play with, and more than once, I’ve been mildly horrified by my daughter’s tendency to act like the overbearing boyfriends that litter my own past. “Twyla, Twyla, Twyla” she will repeat on end, reaching to lock her friend in a chokehold hug while Twyla howls, “No!”

But no matter how fierce the fury, Sofia and Twyla have never gone to sleep angry. They’ve never even had to be separated because it never takes them more than minutes to realize that their friendship is more important than the toy, the shoe, the point. It makes me wonder when we learn to hold onto anger until it becomes hard and immutable, a grudge.

As I teach my toddler how to treat others with kindness and manage her excess of emotion, I’ve begun to ruminate on the way we love as children versus the way we love as adults. When Twyla walks into the room, Sofia’s whole world falls away, and I can hear the love in her voice when she cries out, “Twyla!” She lets herself be swept away, every time. And why not? Sofia has not yet learned to fear vulnerability because her heart has not yet been broken. I don’t think she can even conceive of such hurt, certainly not from someone she so fervently adores.

I love that Sofia and Twyla are learning about love together. That they sometimes call themselves sisters, and other times stage romantic weddings. They don’t distinguish between different types or expressions of love, and I don’t see why they should. Their broad understanding of love is beautiful — it means to share everything, to be loyal always, to forgive easily, and to be honest to a fault. It doesn’t matter who is on the receiving end of that love, and it shouldn’t matter.

When I was in the fifth grade, I watched Kurt Cobain make out with Nirvana bassist Krist Novoselic on Saturday Night Live. It was like receiving a liberating message that I could love my best friend as much, maybe more, than my boyfriend, and could even kiss her if I felt like it. I certainly learned more about love and trust through the intense, girl-crush friendships of my childhood than from any of my early boyfriends. I know I’m not the only one. The power of female friendship has been explored and celebrated in countless novels and movies. And I’m glad that my daughter is having that experience now, with Twyla.

So sometimes, I pause my lecturing and example-setting, and challenge myself to ask not what I can teach my daughter about love, but what my daughter can teach me. Sofia and Twyla can make each other laugh as easily as they can make each other cry, and they never manipulate or abuse that power. They know how to hold onto each other, and let the small stuff go. They love the way so many of us wish we could love, with beautiful, consuming abandon.

I don’t know what will happen in the future, if my daughter really will marry Twyla, or someone else, or if she will settle down with a partner at all. I don’t have any particular hopes for her romantically, beyond personal happiness. But I do have one, and that is the hope that Sofia continues to love as deeply and completely as she does today.

More Like This
26 Toddler Lunch Ideas They’ll Actually Be Excited To Eat
17 Best Potty Training Products For Toddlers
34 Instagram Captions Perfect For Preschool Graduation Photos
I’m No Singer, But My Children Think I Am