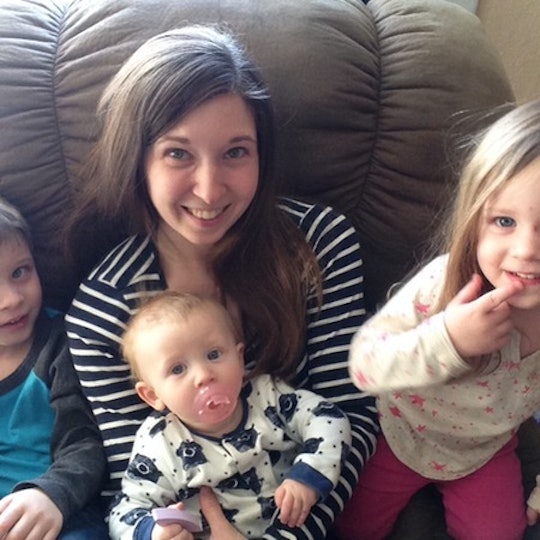 What No One Told Me About Having Three Kids

I was the first among my peers to have a baby by a long shot. So when my friends finally started having their first babies, I was already on my third. With my last baby, my labor was good, and I felt back to normal relatively quickly. I could anticipate the ups and downs of the first tumultuous weeks. I wasn’t paralyzed by fear and anxiety when I brought my baby home. But I settled into a routine fairly quickly. It was like he had always been here. Truth is, having one baby was much harder than having more.

Many of my first-time mom friends looked at me, only a few weeks postpartum, and noted that I seemed to have it all together. That’s a stretch, for sure, but I understood where they were coming from. I was up and out and dressed. My newborn had barely caused a hiccup in my routine, while their new babies were turning their lives upside-down.

“I don’t know how you do it with three.”

I hear it all the time now. I shrug and say it’s not that bad. Sometimes I’ll add that I have a lot of practice, or that it gets easier with time. It’s difficult to find the right words in the moment, to tell them what they are doing right now is so much harder than what I am doing. I want to tell them that having one baby is so much harder than having another. And another.

Having your first baby is like starting your life over from scratch. It’s all trial and error. No one can tell you what to do, or what to expect, or how to make it easier. You can only learn as you go.

I remember bringing home my first baby and being home alone with him in those early days. I had nothing and everything to do all at once. I was constantly in my head, overanalyzing and overthinking every aspect of what I might be doing wrong because I didn’t expect motherhood to be so hard. My world beared no resemblance to the life I had been living mere weeks before my first baby’s birth. Everything was new. Everything was scary. Everything was overwhelming.

Having your first baby is like starting your life over from scratch. It’s all trial and error. No one can tell you what to do, or what to expect, or how to make it easier. You can only learn as you go. You will master one phase of infancy and it'll be gone, something new and harder left in its wake. Everyone will tell you it gets better, but no amount of reassurance soothes you when you feel like you’re drowning at every turn.

It may not be easy having three young children, but I know without a shadow of a doubt that it's easier to bring home your third baby than your first.

There is nothing scarier than bringing home a newborn and realizing you have no clue what you’re doing. There is nothing lonelier than staring at a wall while you hold a screaming baby, knowing no one will be home for hours. No matter how many times you may have combed through every parenting book you find, you'll never really know what to expect. There is nothing harder than your first baby.

The rhythm I’ve settled into now, with three children, is something that took me years to find. It may not be easy having three young children, but I know without a shadow of a doubt that it's easier to bring home your third baby than your first. Three kids is not as overwhelming a prospect as it may seem to a first-time mom looking in. My other kids are not infants. They can communicate their needs. Sometimes they can even help me. Going through the motions of the newborn phase are now second nature. There is little worry, less fear, no loneliness.

My third son joined a family. He was born, and we all shifted to make room for him. When my first son was born, so much was left in chaos. It was just me and my partner, figuring out parenthood. Our world was turned upside down. My partner and I struggled to find each other in the mess of parenthood, and we struggled to find a balance in our lives. Eventually, we did. When we brought home our second, things shifted again, but we adjusted. And when we brought home our third, we did what we'd learned to do: we made room for each other.

Even though each child is different, I have a newfound confidence after surviving my first baby — a knowledge that even when I'm face something difficult and new, I'm strong enough to bear the storm. The old adage that “it won’t last forever” finally means something, because I've experienced firsthand that the sleeplessness and the teething and the incoherent tantrumming does indeed pass.

I know what it's like to feel like you're failing half the time with only one child. I've been there. It may seem counterintuitive, but life with three kids is not as nearly as difficult as when you're struggling to get by with just one. It gets better, easier in some ways, as motherhood goes on, even with more children.