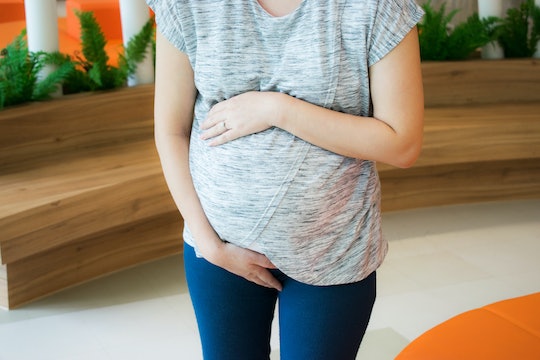 When you're hunched over the toilet tossing your pregnant cookies, it can feel like nothing could possibly be worse. But I'm here to say: it can be. When you lift your head from that porcelain bowl only to discover that your bladder has betrayed you, well, there's no greater treachery. Pregnant women are fairly educated when it comes to first trimester discomforts like morning sickness and nausea, or even the phenomenon of "snissing," but you'd be hard pressed to find a book or article that tells you about stress-induced incontinence during pregnancy. Consider yourself warned.

After my first pregnancy, I thought I knew everything there was to know about vomiting. After all, I'd thrown up damn near everything just about everywhere at all hours of the day. I knew that Zofran didn't help me, but that peppermint oil could keep the nausea at bay, at least until I found an appropriate receptacle for my vomit. I knew what to expect from a pregnancy, and I'd even come to grips with some incontinence postpartum. It wasn't so bad. In my mind, then and always, not being able to jump in the bouncy house was a small price to pay for my beautiful baby.

Enter second fetus. It was a few days before the six week mark, and I could feel it coming. I braced myself for the coming barf, but I got more than I bargained for. When I stood up after an unpleasant second encounter with my lunch, I was surprised to find a tiny puddle at my feet. I'd thrown up with such force that I lost control of my bladder. That's right. I puked so hard I peed myself. The worst part was I hadn't even realized it. I continued the peeing and puking pattern for the next five weeks, until the vitamin B6 and Unisom combo finally kept me from vomiting daily.

This explains why, as in my case, stress incontinence did not present until a subsequent pregnancy.

So what exactly is this fresh hell? It's called stress-induced incontinence. According to WebMD, stress incontinence occurs when the pelvic floor muscles (those that support the bladder) and urinary sphincter muscles (those that regulate the release of urine) weaken. In a normally functioning bladder, valve muscles in the urethra will keep you from leaking urine as your bladder expands until you can get to a bathroom. If those muscles are weak, then anything that puts pressure on the abdominal muscles (like laughing, sneezing, or yes, vomiting) can cause leakage.

While men are most likely to suffer from stress incontinence as a result of prostate surgery, in women, the pelvic floor muscles typically lose strength due to childbirth. Delivering a child vaginally can cause tissue or nerve damage, resulting in poor sphincter or pelvic floor muscle function. This explains why, as in my case, stress incontinence did not present until a subsequent pregnancy. Experienced obstetrician Dr. Yuri Lee explains, however, that a C-section doesn't give you a free pass on incontinence because you still carried a baby in your pelvis. Other risk factors, according to Dr. Lee, include obesity and advanced age. A forceps-assisted birth also appears to put you at higher risk for stress incontinence.

Incidentally, I can now throw up between my legs.

What's a pregnant lady to do if she's habitually urinating when she vomits? The first thing is to get the morning sickness itself under control. If it's the violent retching that's causing you to throw up, then reducing its frequency will also help cut down on the pants peeing. WebMD suggests changing eating patterns to lessen vomiting. That means eating small meals throughout the day, sipping fluids, and avoiding fried, greasy, or spicy foods. Home remedies such as ginger and lemon may help assuage your queasiness as well. Your provider may also consider medical interventions such as the B6/Unisom combo mentioned above, acid reflux blocker Protonix, or bowel stimulant Reglan.

If you can't get the vomiting under control, brave women who have been in the trenches are a great source of hacks. Morning sickness warrior Lindsey Morrow suggests grabbing a towel to put between your legs (drop trou first!) to salvage your clothes. Sometimes changing your position can help. Try sitting with your legs around the bowl instead of squatting or kneeling. If you're at all able to control your puking, you can also try voiding your bladder before dealing with the other end. Incidentally, I can now throw up between my legs. #Skills

Unfortunately, due to the stigma, many women are reluctant to report incontinence to their doctors.

Great. Now how the hell do you keep it from happening to you? Well, turns out that when your OB, midwife, pregnancy app, expectant mother book, mom, and best friend encourage you to do your Kegels, they really mean it. The American Congress of Obstetricians and Gynecologists suggests doing Kegel exercises two to three times a day at 10-20 repetitions. Dr. Lee tells her patients to do them at every stoplight while driving. They really are easy. All you have to do is contract the same muscles you would to stop the flow of urine for a count of 10. They work, too. Kegels are effective at both preventing urine leakage if you do them during pregnancy and as a reactive measure if you're already postpartum.

According to EverydayHealth, urinary incontinence affects 10-13 million Americans. Women are more than twice as likely to experience bladder control issues (you know, because we're the ones having the babies). Unfortunately, due to the stigma, many women are reluctant to report incontinence to their doctors. I get it, ladies. It's embarrassing, but I'm not going to let a little awkwardness stand in the way of my health or sharing my story so other women don't have to suffer in silence. Soiled sweatpants solidarity, sisters. Knowledge is power.