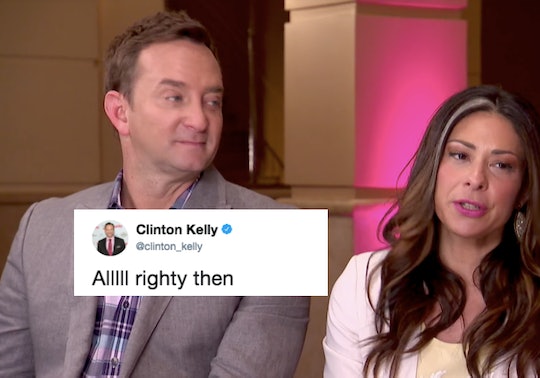 TLC is the reigning champion of wholesome reality TV content. From Say Yes To The Dress to 19 Kids And Counting, the channel is perfect for tuning in to other people's problems and tuning out the world. Former TLC show What Not To Wear was a perfect example of this. The show's light-hearted content and amazing makeovers made it become a reality TV classic while it was on the air — which is probably why so many people still have a connection to the show. And this can explain why so many people feel so strongly that What Not To Wear star Stacy London blocked Clinton Kelly on Twitter — because fans are not happy.

What Not To Wear has not aired a new episode since 2013, but that doesn't matter. The show, which started in 2003 was the first of its kind — a reality show that focused on people's appearances in a playful way that the whole family could enjoy. The best part about watching the show was seeing people's lives transform, with the help of some wardrobe changes and some new hair and makeup tips. But, perhaps the best part was the rapport between the hosts and stylists, Kelly and London, who led the transformations.

But it is possible that Kelly and London's friendship might not still be what people remember it by — because on Wednesday, Kelly tweeted a screenshot that showed London had apparently blocked him on Twitter, causing some fans to actually lose it.

Fans took to Twitter to react to Kelly's latest tweet, sharing thoughts of disbelief and disappointment. Seriously, for long-time fans of the show, this is almost as bad as finding out your parents are getting a divorce...almost. The reactions from fans are definitely worth noting:

Following the discovery that his former co-host blocked him on Twitter, Kelly took the time to tweet with fans — and did not hold back. One user pointed out that Kelly was not following London in the first place, which Kelly wasn't a huge fan of. "I don't need attention," Kelly tweeted. "Thought it was hilarious. Bye basic random chick."

And when one fan asked Kelly to "spill the tea" on his former co-host, Kelly played coy. "The tea is old," Kelly tweeted. "And I never spill tea, unless I'm shook, which I'm not." For those unfamiliar with 2017 slang, this roughly translates to: "There is nothing to say or reveal about behind-the-scenes drama with London. And I never talk about drama, unless I am deeply upset or surprised, which I am not."

London, however, has since remained silent on Twitter since Kelly's big discovery and there is no explanation as to why she might have blocked him in the first place. But if Kelly's past interviews are any indication, then it could be because the former co-hosts were never that tight to begin with.

When the show went off the air four years ago, Kelly began to open up about his relationship with London and what went on behind the scenes of their fan-favorite reality show, writing a collection of essays, I Hate Everyone, Except You, which was published earlier this year. And just like any of the people you work closely with, Kelly revealed that he and London had their good days and their bad days. In an interview with The Austin American-Statesman, Kelly compared his relationship with London akin to "a brother and sister who have been trapped in the backseat of a car." Kelly told The Austin American-Statesman:

We spent so much time together for 10 years. It was funny in the beginning when we completed each other's sentences. It got to be like "OK, we need a break from each other."

In a 2013 interview with Yahoo, Kelly revealed that he and London had "come to a peace" in their private lives during their last season of filming and said that while they were great friends at work, they both went home separately to their own lives once the cameras stopped rolling. Anyone who has had to work with co-workers in very close quarters can probably relate to this.

While London blocking Kelly might come as a shock to old fans of the show, Kelly has basically been trying to tell fans all along through his interviews that this was bound to happen.