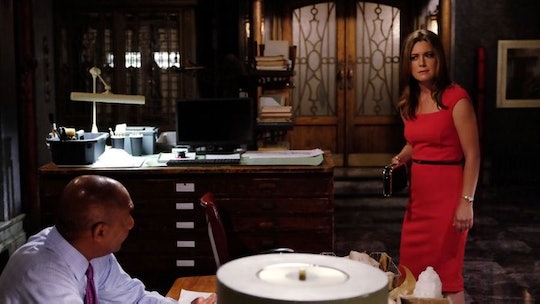 Peus Is Working For A Mysterious Group On 'Scandal'

Throughout Season 6 of Scandal, there's been a mysterious group pulling the strings that led to Frankie Vargas' death. So far all fans have learned about this group is that a guy named Peus is part of it, along with the woman who calls herself "Samantha," at least when she's with her boyfriend David Rosen. They also made Mellie become president, so they can basically run the country through her, but it's still unclear who they've done this all for. What organization is Peus working for on Scandal or is he really just working for himself?

Based on the way Peus killed that first man who approached Rowan, it looks like Peus is running things, however, that could just mean he's leading the organization. Peus and Samantha can't be the only ones running things if they have the ability to threaten so many people's lives at once. It's like they're B613 but bigger and scarier because they don't have a name. They just swooped in like it was nothing and took over, scaring even Rowan into submission.

It appears Rowan is the only one who has any real clue who these people are. Is that because he once worked for them? It seems unlikely that he faced off against them before and survived it unscathed, so it's most likely that they taught him everything he knows. The real question is, why did this group decide to make an appearance now? Why do they want the presidency at this point in time? There has to be a reason.

Hopefully the next episode will provide fans with answers. Now that Fitz had Rowan arrested and brought to the White House, everyone will come together to figure out a way to bring down this mysterious group. Well, they'll try at least. There's no love lost between Rowan and Fitz, so it'll be interesting to see how this team-up will play out in the coming episode.

Never forget that Rowan was responsible for killing Fitz and Mellie's son. Also, Rowan put Jake and Huck through hell a few times, both while he was Command and after. Jake and Fitz's friendship is always fragile at best and Olivia only forgave Abby because Fitz asked her to. Huck and Quinn probably won't be as forgiving.

Needless to say, Olivia has the odds stacked up against her. Thankfully, she's a natural born fixer and can hopefully come up with a plan to turn the tables in their favor.