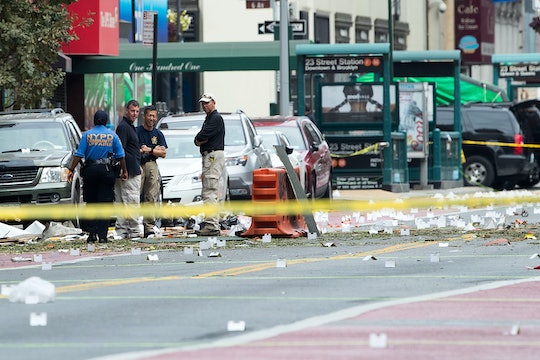 What Other Cities Are Being Investigated For Bombs? There May Be Terror Cells Involved

It was an incredibly unsettling weekend for many Americans, particularly in New York, after an explosion in New York City's Chelsea neighborhood injured 29 people, and unearthed what appears to be links to other attempted bombings in New York and New Jersey. While officials have not yet confirmed a definite link between the incidents, 28-year-old Ahmad Khan Rahami has been arrested in Linden, New Jersey, in connection to the Chelsea explosion following a shootout with police, according to the The New York Times. What other cities are being investigated for bombs? Right now, the focus of the investigation appears to be on the Chelsea explosion, as well as a separate explosion that took place Saturday morning in Seaside Park, New Jersey. But according to NBC News, sources have suggested an "active terrorism cell with multiple players" could be behind the bombs, which would indicate a much larger investigation will be at hand. Romper could not reach Rahami for comment.

While there are still many pieces left to put together about exactly what is behind the recent slew of attempted bombings, there are a few things that are clear. According to CNN, the Saturday night explosion in Chelsea involved a pressure-cooker bomb packed with BBs, ball bearings, and other pieces of metal that was left either in or near a dumpster. A similar bomb was later found approximately four blocks away, though it failed to detonate. Rahami was reportedly recorded rolling a duffel bag close to the site of the Chelsea explosion on surveillance video ahead of the blast, and was also seen at the location of the second failed bomb as well.

Following the attempted bombings in Seaside Park and Chelsea Saturday, five other explosive devices were found in a backpack left by a garbage can near a train station in Elizabeth, New Jersey, Sunday night, according to The Telegraph. Though the investigation is still ongoing, it has been confirmed that Rahami's last known address was located in Elizabeth, suggesting he might also be connected to the New Jersey bombings as well. According to CBS News, the FBI raided a building in Elizabeth early Sunday that was thought to be connected to Rahami.

Whether or not the FBI probe will expand to involve other cities in New Jersey or neighboring areas is still to be seen. What's also uncertain is whether a stabbing at a mall in St. Cloud, Minnesota, on Saturday can also be linked to the suspected terror activity happening on the East Coast. According to The Washington Post, St. Cloud State University student Dahir Aden attacked nine people inside of the Crossroads Center mall at around 8 p.m., and was then fatally shot by an off-duty police officer inside a Macy's store. A news agency linked to ISIS has since reported that the group has taken responsibility for the attacks, though it's still unclear whether Aden had indeed had any contact with the group.

President Barack Obama spoke Monday in response to the weekend's stabbing and bombing, and urged citizens not to give into fear surrounding the threat of terrorism, according to CNN:

At moments like this, I think it's important to remember what terrorists and violent extremists are trying to do: they want to hurt innocent people, but also inspire fear in all of us. Even as we have to be vigilant and aggressive ... we all have a role to play as citizens in make sure we don't succumb to that fear.

As the investigation continues, officials will continue trying to discern Rahami's involvement and motive. It is also still unclear if and how the bombings connect to international terror activity, whether Rahami has worked with others to orchestrate the attacks, and whether other cities will need to be on alert for continued attacks.