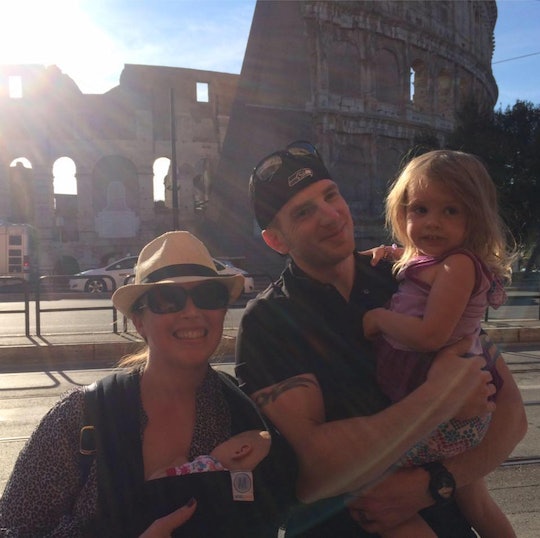 What Our Biggest Fight As New Parents Revealed About Us Both

There is no bigger milestone in a marriage or relationship than when you become parents. You know challenges lie ahead, but you don't understand how big or important they'll until you're in the thick of it. There are countless things my husband and I said we'd never do before we had kids, and we've literally done all of them: bed sharing, extended breastfeeding, and feeding our daughters food that isn't organic — these are just a few of the big "nos" we're totally guilty of. And for the most part, we've handled these mistakes in stride. But our biggest parenting fight changed everything, and it had nothing to do with sharing the bed, extended breastfeeding, or serving our kids processed snacks.

To be honest, it's not like my husband and I sat down and had a formal conversations about how we'd discipline our children. We were too busy living in the moment to discuss all the future what ifs. Not to mention, he was deployed for the first eight months of our daughter's life and so the parenting decisions pretty much fell on my shoulders. Obviously, an infant doesn't need to be disciplined, and since my parenting philosophies fell under the Gentle Parenting/Attachment Parenting categories, it was only natural that I'd continue down that path the older she got. But I didn't really communicate this all that well to my husband, unfortunately, and that's how we ended up having one of our biggest parenting fights.

In the time my husband was away, I'd been trucking along, making all of the decisions, telling him what I thought was best based off all of my "research" (which is a word he still scoffs at today). When he got back, he followed along because he traveled so much for work and trusted me to make all of the decisions. And honestly, even if he didn't agree with me, he went along with it anyways because he didn't want to upset me. But eventually, we hit a road block. And that's when the blowup happened.

I didn't talk with him about it afterward and he built up such frustration and resentment towards me because he felt like I wasn't letting him parent.

My oldest daughter was in the throes of the terrible twos, and so she did what most 2 year olds would do: She threw a fit one night before bedtime. I don't remember all of the details (sh*t gets fuzzy when you're an exhausted parent), but it ended with Jayson, my husband, putting her in timeout. The problem with this timeout was that, a) she was just barely 2 years old and didn't really comprehend why she was being forced to stand in front of a wall, and b) I'd recently read a gentle parenting article in a magazine about timeouts and according to the article, the way Jayson went about his timeout had obviously been all wrong. So, I intervened and comforted her because I knew she didn't understand what was going on, and naturally, he and I ignored each other all night. That was strike one.

As her tantrums grew and become more and more frequent, our tempers flared regularly. We clearly hadn't prepared ourselves for our once sweet and quiet child to go through this phase. And so we started a nasty little cycle: He'd overreact and yell at Sadie, and I'd run to her defense, essentially undermining everything he tried to do. I didn't talk with him about it afterward and he built up such frustration and resentment towards me because he felt like I wasn't letting him parent.

Months and months of pent-up resentment finally came pouring out from both of us.

Looking back, I think I didn't talk with him about it for two reasons. First, I was the primary caregiver and he was always gone, and secondly, I didn't think he would be interested enough to read what I read or want talk about it. So, I just didn't say anything at all. I was, unsurprisingly, totally wrong.

One night, our daughter had a tantrum during dinner time, and again, he got angry and tried putting Sadie in timeout. I of course rescued her, which led to us going upstairs and giving each other, to put it politely, a piece of each other's minds. Months and months of pent-up resentment finally came pouring out from both of us. He was mad because I always undermined him as a parent, he felt like he didn't have a voice or a say in any parenting decisions, and even though I tried to tell him about research and statistics and just my basic gut instincts as a parent, he didn't have ears for it.

Because our parenting philosophies were clearly so different at that time, I told him he made me feel like a bad mother when I was the one who was doing all of the research and making all of the decisions because I was the primary caregiver. I've never been one to subscribe to the defense of "this is how my parents did it and I turned out fine" train of thought, and so it killed me to hear him literally say those exact words.

I hadn't even realized we had a problem on our hands until we were in the middle of an argument, each saying things that totally shocked and surprised the other.

It felt really crappy to be having that conversation, but looking back, even in our anger, it was a heart to heart. That conversation was a long time coming. And I'd love to tell you that we found some sort of resolution and promised to do better, but we didn't. If I'm being honest, I think we actually just silently acknowledged the other's feelings and tried to do better in the coming days and months. And since then, we have tried. But it's still really hard. We were so unprepared for what parenting together meant that we allowed a huge rift to sneak up on us and we didn't know how to handle it. I hated that feeling of not being in sync with each other. I hadn't even realized we had a problem on our hands until we were in the middle of an argument, each saying things that totally shocked and surprised the other.

Our daughter is now 3, and though we still have moments where we disagree, we've become a more united front when it comes to discipline, especially since our second child was born. Now that we know what we are in for this second time around, I think we'll both be better prepared and hopefully communicate better about expectations. We've been together long enough and love each other enough that we hope to not let the challenges of parenting get the best of us, even when it feels like they are.