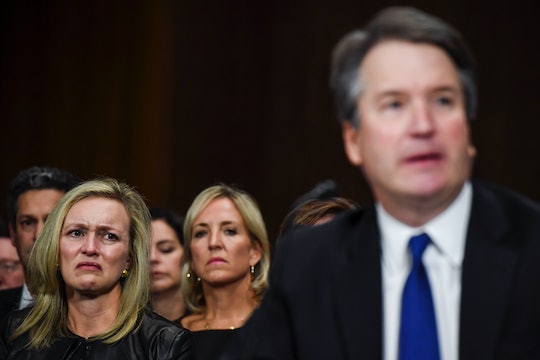 Here's What Our Daughters Learned From Judge Kavanaugh's Hearing

The president of the United States called the accusations tarring Supreme Court nominee Brett Kavanaugh a "big fat con." During Kavanaugh's Senate Judiciary Committee hearing, Sen. Lindsey Graham called the process that allowed a sexual assault victim to share her truth an "unethical sham," erupting in a fit of anger and promising that he would vote to confirm Kavanaugh regardless. And throughout the hearing, Republican senators on the Judiciary Committee gave their heartfelt condolences to Kavanaugh and his family for the pain they've gone through as a result of the sexual assault allegations levied against Kavanaugh, without ever mentioning Dr. Christine Blasey Ford, the woman who says Judge Kavanaugh attempted to rape her at a party in 1982.

Not a single Republican man acknowledged Dr. Ford's bravery for sharing her story, even though she admitted she was terrified.

Not a single Republican man thanked Dr. Ford for coming forward and sharing her truth so candidly, even though that meant dredging up painful memories of a traumatic assault, though one senator did attempt to paint her as the victim of a Democratic conspiracy to tank Kavanaugh, in a particularly niche demonstration of conservative empathy.

And not a single Republican man apologized to Dr. Ford for what she and her family have been through since her allegations were made public, including the death threats and harassment she has endured, the doxxing, the email hacking, and her family going into hiding.

Instead, they focused on Judge Kavanaugh — showering him with admiration and sympathy — a white, privileged, powerful man who was visibly enraged at the notion that he might not receive a coveted promotion. And across the country, young women were inundated with the sound of the patriarchy working to deny rape culture at its core and close ranks around the accused while vilifying the accuser. As it always does.

Young girls saw and heard it all. This is what they learned.

Our daughters learned that if your abuser has female friends, then you must be confused about your assault, because men who are friends with women never try to actually rape them. Strictly speaking, 85 to 90 percent of sexual assaults reported by college women are perpetrated by someone known to the victim, according to the National Institute of Justice. But don't pay attention to that, dear daughter. Your abuser says he has women friends, and promises that means he is incapable of ever hurting a woman.

Our girls learned that your abuser's ability to continue to play basketball is vitally important, and any allegations of wrongdoing that could keep a man off the court is an atrocious affront to his precious future. So before you come forward with your story or seek the justice you so rightly deserve, think about the basketball team your abuser will no longer be able to coach.

Girls learned that if you're a white, privileged man in a position of power, you can yell and cut sitting senators off during a Senate Judiciary Committee hearing. But, dear daughter, if you find yourself in that position you will not be a white, privileged male. As a result, you must appear polite, put-together, docile, likable, poised. You will need to present yourself in a way that makes you look "believable" and "human," as CNN commentators John King and Jake Tapper put it.

Young girls learned that their experiences don't matter, except in the event they are invoked as collateral damage of accusations leveled at their father. This thought, this is worthy of tears.

They learned that what a young man does to you is of no consequence if that man grows up. Because what teenage boy doesn't like beer? And what teenage boy doesn't go to numerous parties; parties he may not remember; parties he will write about in his yearbook using debaucherous rhetoric. "We are talking about [Judge Kavanuagh's] actions in high school!" Senator Orin Hatch cried during the hearings, as if asking what a man did during high school is unthinkable. "He was an immature high schooler," Senator Hatch claimed, as if a person's age redefines their actions. What happens to you in your teenager years doesn't matter, because what a man does in his teenage years doesn't matter. Boys will be boys.

Young girls learned that if your abuser didn't write the sexual assault in his calendar, it didn't occur. His inability to notate a violent abuse negates your recollection of it, however positive you may be that the abuse did, in fact, occur. Make sure the man who abuses you takes judicious records, otherwise your truth will be nullified.

And if your abuser had straight A's in school, or was academically capable of attending Yale Law School, you're probably mistaken. Men with good grades clearly were too busy studying to sexually assault anyone.

Young girls learned that their experiences don't matter, except in the event they are invoked as collateral damage of accusations leveled at their father. This thought, this is worthy of tears.

By the time Kavanaugh finished giving his testimony, young girls and women across the country had heard a chorus of victim-blaming. But it's a tune they've heard before, and especially at the beginning of the 2016 presidential election. Their president bragged about sexual assault on tape. After the president was accused of sexual assault by at least 16 women, he suggested his accusers were "too unattractive to assault." They watched as the president endorsed Roy Moore, a man accused of sexually assaulting underage women, and listened when the president called Rob Porter "a man of true integrity and honor" after his ex-wives accused him of domestic violence.

Judge Kavanaugh's testimony was a microcosm of systemic misogyny; one that impacts young girls of every single age. Today a sexual assault victim put herself on trial in an effort to change that system. And in fits of anger and rage, our daughters watched as the system fought back.

More Like This
Spain Could Offer Up To 5 Days Of Menstrual Leave A Month & It'd Be A Game Changer
My Nanny Showed Me How To Be A Mother
Infertility As A Stepmom Means Double The Alienation, But So Much Love
Kelly Ripa Loves A Sunday Dinner Date With Her Grown-Up Kids