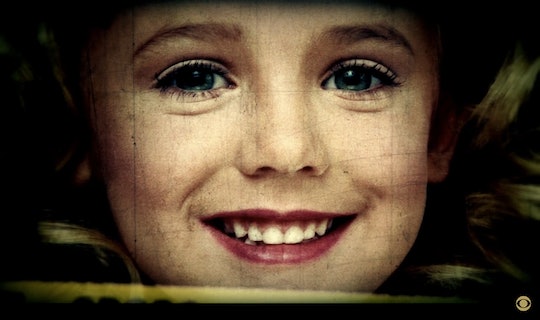 What Pageants Was JonBenet Ramsey In? She Made A Name For Herself

CBS has a new true crime docuseries premiering this fall that will take a fresh look at the murder of 6-year-old JonBenét Ramsey. The Case Of: JonBenét Ramsey will be a six-hour miniseries that will air over the course of three nights, beginning on Sept. 18. It's no surprise that CBS wants to try its hand at a true crime series following the success of similar series like HBO's The Jinx and Netflix's Making a Murderer. Ramsey's tragic murder has gone unsolved for two decades. In the span of 20 years, though, the case has remained notorious. There are countless conspiracy theories surrounding the crime still to this day. Ramsey's murder has attracted vast media attention since 1996, much of it stemming from the fact that Ramsey was a child pageant queen. Ramsey competed in multiple beauty pageants across the country, and went on to win many of them.

In her six short years, Ramsey truly achieved queen status in the world of beauty pageants. She took home the crown at five prestigious pageants both in her home state of Colorado, as well as around the country. Ramsey won her first competition in 1994 at just four years old at the Colorado State All-Star Kids Pageant. Just a few months later, 4-year-old Ramsey stole the show at the Little Miss Charlevoix pageant in Charlevoix, Michigan, where the Ramsey family used to vacation in the summer. Ramsey went on to take home first place titles at Little Miss Colorado, America's Royale Miss, and National Tiny Miss Beauty.

Ramsey's mother, Patsy, had been a beauty queen herself. JonBenét was following in her mother's footsteps after seeing Patsy on stage at a pageant reunion. Being a pageant queen is a huge part of JonBenét's legacy, however, her father has since spoken out about his regrets concerning his daughter's participation in pageant culture. John Bennet Ramsey said he and his wife were "so naive" and that he believes with all his heart that "it's not a good idea to put your children on public display."

JonBenét's killer was never captured. Her father has said he now looks back and wonders to what extent her pageant career had to do with her death. He spoke with ABC about his new way of looking at things. John said he believes the pageants brought unwanted attention to his family. He said his only advice to other parents is to "recognize that regardless of where you live, there could be evil around you. And don't be naive about it. And keep your kids protected."

The murder of JonBenét Ramsey was tragic, and the CBS special will surely be emotional. Let's try to remember that JonBenét was more than just a child pageant queen, that she was a lively little kid whose life was cut devastatingly short.