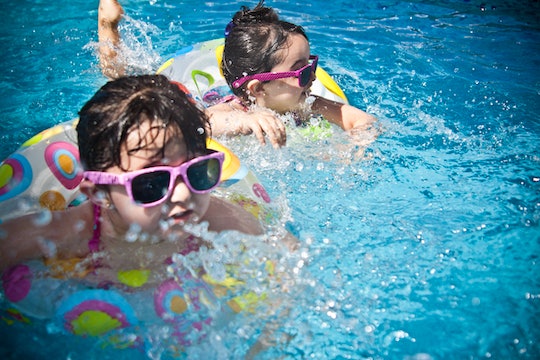 What Parents Should Know About Dry Drowning

When you're a parent, trying to keep your children safe is a major priority. But the gut-wrenching reality is that there are an almost infinite number of ways that a child can be hurt, and sometimes in ways that no one would have ever suspected. On Saturday, 4-year-old Texas boy Frankie Delgado died from what's known as dry drowning, according to People, nearly an entire week after going swimming with his family. What's even worse? They had no idea anything was wrong. It may not be something on many parents' radars, but here's what parents should know about dry drowning, according to experts.

The scariest thing about dry drowning by far is that it seems to happen almost without warning — and often long after you've left the pool or beach. It can also happen even in shallow water, which honestly makes dry drowning seem like the stuff parenting nightmares are made of. But as awful as deaths like Delgado's are, doctors are emphasizing that there are still ways to spot the signs of dry drowning, and that it isn't necessarily something that parents need to be overly concerned about.

According to WebMD, dry or secondary drowning can occur after any kind of incident where water might enter the body, like when it's accidentally swallowed or inhaled while swimming. In most cases, that's no big deal (haven't we all sputtered on water or been caught off guard by wave at the beach?), but sometimes it can cause serious problems, especially in children. In cases of secondary drowning, that water can enter the lungs, where it can cause a condition called pulmonary edema that may lead to breathing trouble. In dry drowning, water doesn't actually reach the lungs specifically, but the inhaled water can cause the vocal cords to close up, possibly causing suffocation.

One important thing parents should keep in mind, first and foremost, is that dry and secondary drowning is actually very rare. Florida pediatrician Dr. James Orlowski told WebMD that dry and secondary drowning accounts for only about 1 to 2 percent of all drowning-related incidents, and University of Vermont Medical Center Chief Medical Officer Dr. Stephen Leffler told MyChampainValley.com that in his 24-year career as an emergency medicine physician, he's seen only a few cases of dry drowning (and in each of those cases, the child survived).

In other words, you shouldn't necessarily feel like you should rush your child to the hospital anytime he or she accidentally swallows some water in the bath. But if a child experiences some kind of difficulty while swimming, ChildrensMd.org's Dr. Kathleen Berchelmann said parents should keep an eye out for dry drowning symptoms in the days that follow, including persistent coughing, vomiting, or any change in behavior that just seems "off." She also noted that anytime a child struggles in submerged water — especially if they needed to be helped by a lifeguard or another bystander — they should always be evaluated by a medical professional, even if they seem fine afterwards.

The Pediatric Insider's Dr. Roy Benaroch, agrees. The Atlanta-based pediatrician wrote that, while dry drowning can seem much less obvious (and therefore, also much scarier) than traditional drowning, the takeaway for parents should actually be that both types of drowning will both cause immediate symptoms. If those symptoms persist — regardless of whether the swimming incident was "wet" or "dry" — it's a sign that medical attention is needed, even if it's just that the child seems more tired than usual or looks pale.

In other words, parents don't have to be afraid to let their kids play in the water, or freak out about every immediate water-related cough of sputter. But if something concerning happens, don't automatically brush it off when you head home. Benaroch said, according to Pediatric Insider:

If there are continued symptoms after a near-drowning, go to the ED. Even if symptoms seem to improve at first, if any further symptoms evolve or persist, go to the ED. Most dunks [in the water] do not require any medical attention. Look out for continued or later symptoms to know when you really need to worry.

As Frankie Delgado's family tragically learned, the fact that dry drowning is rare obviously doesn't mean it can't happen, and it's certainly not their fault that they didn't recognize the signs. But the consensus among experts appears to be that, while dry drowning does occur, it's not necessarily as scary or hard to identify as it may seem. And being aware of the symptoms can make all the difference.

More Like This
14 Recipes For Sick Kids When Everyone's Tired Of Canned Soup & Crackers
Viral Hives In Children: What Doctors Want You To Know
Doctors Swallowed LEGOS To Prove Everything Is Awesome For Kids Who Do The Same
A Parent’s Guide To Stomach Pain In Kids
What Parents Are Talking About — Delivered Straight To Your Inbox