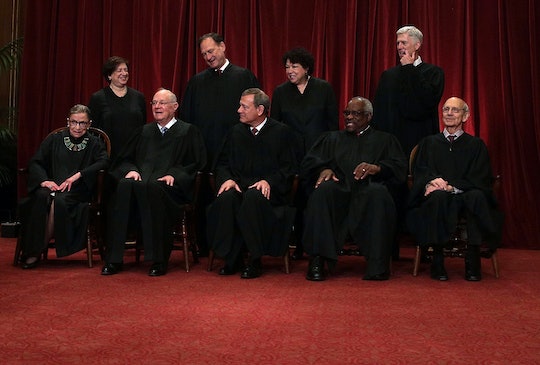 Since President Donald Trump first took office in January, his so-called "travel ban" has been the focus of numerous articles, discussions, and yes, court cases. As the ban has been struck down as "unconstitutional" several times now, the Supreme Court has officially decided to hear a case on the matter. Until then, though, the court will uphold "partial enforcement" of the ban, per BuzzFeed. But, exactly what parts of the travel ban will the Supreme Court enforce?

Monday morning, the Supreme Court announced that it would make an important decision regarding whether Trump's travel ban was lawful, after two federal appeals courts have blocked the executive order, stating it was in violation of the First Amendment. According to the Supreme Court's statement, both courts decided that the ban "violates the Establishment Clause of the First Amendment because it was motivated not by concerns pertaining to national security, but by animus toward Islam."

However, the Supreme Court's decision isn't a comprehensive win for opponents to the ban, as it does "allow the federal government to implement the bans against those without connections to people or groups in the U.S.," according to BuzzFeed. But, what exactly does that mean, and what does it mean for those attempting to enter into the United States from the six majority-muslim countries named in the order?

The court is allowing the ban to go into effect for foreign nationals who lack any "bona fide relationship with any person or entity in the United States." The court, in an unsigned opinion, left the travel ban against citizens of six majority-Muslim on hold as applied to non-citizens with relationships with persons or entities in the United States, which includes most of the plaintiffs in both cases.

This news comes after the initial chaos following Trump's first order in January, which barred foreign nationals who had already been granted entry to the United States from getting back in, tearing families apart and causing protests to break out at airports all over the country.

Now, after two federal appeals courts have ruled against the ban, the Supreme Court has granted Trump his first semi-victory on the ban. By allowing the ban to go into place in 72 hours, anyone from Iran, Libya, Somalia, Sudan, Syria, and Yemen without solid ties to the United States, will be denied entry into the country.

This ruling will also pertain to the United States' refugee program, meaning that only refugees with ties to someone or something in the United States will be allowed in. However, the official Supreme Court ruling won't come until this fall, as the court won't hear arguments until October. For now, though, it appears that Trump's travel ban has temporarily been enforced, with a few restrictions, that is.