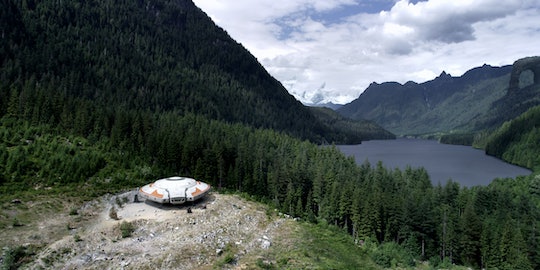 Warning: spoilers for Episode 1 ahead! Lost in Space dives right into danger when the ship carrying the Robinson family through space crashes early on in the first episode. The planet they find themselves on is a strange one, seemingly far from Earth but still somewhat habitable. But what planet were the Robinsons on in Lost in Space?

It's not an easy place to pinpoint exactly, and that's likely because the planet isn't a real one. The show is science fiction and it's set far in the future, so it's bound to invent an unreal situation or two. The planet the Robinsons crashed on looks like an endless tundra, with mountains and snow as far as the eye can see. Despite the freezing conditions, there are some advantages to the location: it has breathable oxygen, giving the family the first fresh air they've gotten in months.

It's also clear that other survivors have found their way to the unknown planet as well, because middle sister Penny noticed other ships in the atmosphere even if she couldn't contact them. But there are quite a few negatives mixed in with the positives; the terrain seems to be unstable, and the temperature drops 60 degrees below zero at night. It may be livable to a degree, but it isn't sustainable by any means.

Family matriarch Maureen claimed the planet was "unlike any we have ever mapped," deeming it a "Goldilocks planet" because it has Earth-like atmosphere, air pressure, and gravity. It also has plenty of available water and weather patterns similar to Earth's, including snow and rain. Maureen said it was like winning a lottery to find themselves somewhere like that, but she might not have thought so if she knew how tough things were going to get before long.

The crash had left Maureen with a broken leg, but that was the least of the Robinsons' worries throughout the first episode. Soon their ship sank below the surface of the lake it landed on, forcing eldest daughter Judy to dive into the frigid water in search of supplies. But the lake froze over on her way back to the surface, trapping her until a solution could be found. While on a search for that solution (the planet's store of magnesium could be used to melt the ice), youngest son Will was separated from the rest of the family.

Will took a fall while out scavenging for magnesium with his dad, and that tumble brought him to another part of the planet quite different from the site of the crash. The new locale proved to be lush and green without so much as a snowflake in sight. Will could hear the sounds of animals around him even if he couldn't spot them at first. It seemed like the planet was a good deal easier to exist on when one wasn't marooned on top of a mountain. The forest and valley where Will was exploring looked a lot like Earth.

The planet doesn't seem to have a name, though it was possible the Robinsons just don't know what it is yet. The episode indicated that they aren't the first to get stuck there, though they didn't benefit from the experiences of previous adventurers and this likely won't be the first uncertain situation they find themselves in over the course of Season 1.

The show leaves room for all different kinds of worlds to be discovered, and it seems like a guarantee that the Robinsons will stumble upon more than a few of them.