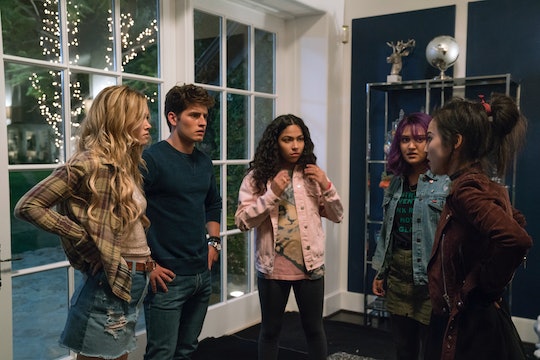 An all new Marvel series is here, but it's not airing on Netflix; you can find it on Hulu. The new series is called Runaways, based on the comics of the same name, and follows a group of six teens from different backgrounds who discover their parents are a group of villains called The Pride and that they also have powers themselves. So what powers do the Runaways have? They're actually pretty interesting and diverse.

If you're unfamiliar with the Runaways, in the original comics, the teens' parents meet every year for a charity event, and it was during one of these "events" that the kids spy on their parents and discover the truth. The comics were first released in 2003 but came to an end in 2004, though a new edition of comics, written by Rainbow Rowell, was released in September of this year. Based on the trailer for the TV series, it looks like the show will stick pretty closely to the source material, though don't be surprised if it goes off book along the way.

Although the new show is airing on Hulu, it will still take place in the same Marvel Cinematic Universe as the movies and other Marvel shows out right now. The premiere, which was released today and currently streaming, includes the first three episodes of the season. Following this week, new episodes will release every Tuesday; in total the first season has 10 episodes. But in the meantime, here's what you need to know about the teens and their awesome powers.

Alex actually doesn't have any superpowers and is a human, but he is incredibly smart and a great leader. In fact, it's Alex who ultimately brings the Runaways together in the first place.

Nico is a witch, though don't expect her to do spells like Hermione. She'll mostly used a magical stave called the Staff of One, which she can also merge with when she gets hurt.

Chase doesn't technically have any powers, but because his parents are mad scientists, he's able to get his hands on some helpful tech, like weaponized gloves called Fistigons and multi-spectral goggles. He was also given the nickname Talkback in the comics because, you guessed it, he often talks back. He's also the designated driver since he's the only one with a driver's license.

Originally, Molly was actually Molly Hayes in the comics, but the name change hasn't altered her awesome ability. As the daughter of two mutants, Molly is incredibly strong. In the comics, she was nicknamed Bruiser. She's also the youngest of the Runaways, though in the comics she was 11 and it's unclear if she'll be a bit older since the actress who plays her, Allegra Acosta, is 14.

Along with discovering her parents are villains, Karolina also gets the extra shock of learning they're aliens and so is she. However, being an alien comes with its own set of perks. She can absorb solar radiation and convert it into a unique energy type, which she can manipulate for various uses. Additionally, Karolina is known for being one of the few gay/lesbian characters in the Marvel Universe. Hopefully, her sexuality remains part of her character on the show.

Gertrude, though she goes by Gert for short, has a very interesting ability. As a gift from her parents, she was given a pet dinosaur, or deinonychus to be specific, with whom she shares a psychic bond with. The dinosaur is named Old Lace, and in the comics, Gert took on the name Arsenic because she hates her given name. (Plus, you know, Arsenic and Old Lace is just too perfect an opportunity to pass up.)

You can meet the Runaways in the new series, which is now streaming on Hulu.