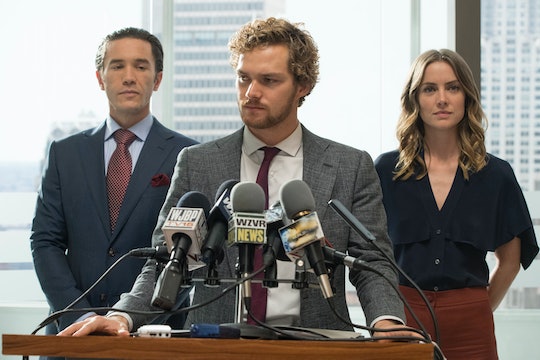 Netflix's latest Marvel series, Iron Fist, is almost here and for those who aren't all that familiar with Marvel's superheroes, there are some things you may want to know about this latest vigilante. For starters, what powers does Iron Fist have? His name seems to say it all, but does he really just have a legit Iron Fist? Here's what you need to know about the latest Marvel superhero to come to Netflix.

First, Iron Fist's real name is Daniel Thomas Rand-K'ai, according to the Marvel Universe Wiki. However, for the show itself he'll just be going by the name Danny Rand. Similar to Daredevil's Matthew Murdock, Danny studied martial arts after the death of his parents in the mystic land of K'un-Lun, where he spent 15 years of his life training. When Danny turned 19 years old he requested and earned the opportunity to win the power of the Iron Fist. He had to face off against a fire-breathing serpent called Shou-Lao the Undying and as you may have guessed, he won, gaining the mystic energy of the Iron Fist.

So what exactly does this mystic energy do? Apparently it can summon superhuman energy to reinforce the power of the blows, struck by hands. Basically, what this means is that dude can punch really, really hard and no one wants to be on the receiving end of that fist.

Based on the trailer for the show, it looks like Iron Fist will have a similar set up to all the Netflix Marvel shows that came before it. The show begins with Danny returning from his 15 year-long stay in K'un-Lun, which means viewers will probably be privy to some flashbacks, revealing Danny's origin story. It's clear it'll be a little different from how it was done in the comics (his parents die in a plane crash on the show, not while in K'un-Lun).

Still, minor changes aside, the Netflix Marvel team has done amazingly well thus far and it's likely Iron Fist will be just as good, if not better, than the shows that preceded it. Danny is the last "Defender" to get a show before he, Daredevil, Jessica Jones, and Luke Cage, all team up for The Defenders series, which is due out later this year.

While it's uncertain if any of The Defenders will make an early appearance in Iron Fist, nurse Claire Temple, who's appeared in every one of the Marvel shows thus far, will be in it. She's basically the string that connects all the superheroes together and I couldn't be more thrilled.

You can see Iron Fist and learn more about his origins when the series premieres on Netflix on Friday, March 17.