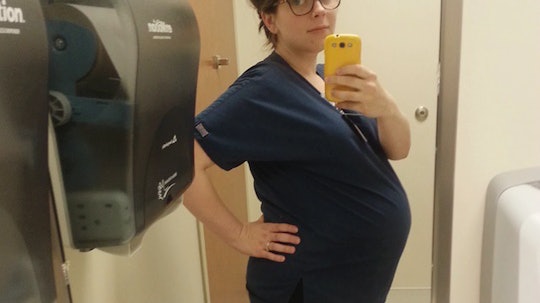 I Had The Dreaded PUPPPS & This Is What It Was Like

The first 34 weeks of my first pregnancy were a breeze. I was the kind of mom-to-be other expectant mothers hate: I had very little nausea, I’d only gotten sick once, and I had no complications. I felt great. Carrying a baby was easy, and we were both healthy. At 34 weeks, though, my lucky stars changed their direction. I developed Pruritic Urticarial Papules and Plaques of Pregnancy (PUPPPs) and was so miserable I made the complicated decision to induce labor.

Right around week 34, I noticed my stretch marks were especially itchy. It is really common for pregnant women to notice their stretch marks itch. But for me, the itchiness was worse by the day. Soon I noticed hives on my stomach and thighs. At a visit with my OB-GYN, I brought up how uncomfortable I was and showed her some of hives on my belly. She shrugged it off, not even looking up from my chart. “Stretch marks itch,” she told me coldly, “This part of pregnancy is going to be uncomfortable, you should just prepare yourself.” She was essentially ignoring me, and whether she meant it intentionally or not, she was making me feel like an overdramatic, whiney first-time mom. Up until now, my pregnancy had been so easy and I’d rarely complained, so I kept quiet even though the itching was quickly becoming less of a distraction and more of an issue.

After the appointment, the itching quickly got worse. I had hives on almost every inch of my body. My 38-week appointment was with a different doctor, but I had already resolved not to mention that every day was worse than the one before it. My last doctor had made it clear: Itching was normal and I should get used to it. So I changed into a gown for my exam and acted like everything was as perfect. But when the doctor walked into the room, his eyes went straight to my legs, which were covered in hives and scabs from itching myself raw. I could tell he was horrified. He immediately asked me if anyone at the office had talked to me about PUPPPS.

Not sure what to say or if I should rat out the other OB, I politely told him about my last visit. He explained that PUPPPs is a condition one in 200 women experience during late pregnancy, and even though it’s a pretty common rash, some women experience symptoms far worse. I didn’t need to be told I was part of the latter group.

If I’d been diagnosed a few weeks earlier, he said, I would have been prescribed a topical steroid to keep the rash from getting worse, but because he was concerned about using steroids at 38-weeks pregnant, he could only recommend a few over-the-counter products, mostly unscented moisturizers and Pine Tar Soap. Then he mentioned the only “guaranteed” treatment was delivery — even though I was two weeks away from my due date.

I declined inducing, and the itching continued to get worse. I had started to scar, and I was barely sleeping. My exhaustion turned to depression and for the last week of my pregnancy I was barely getting out of bed. At my 40-week appointment, I was showing no signs of labor and was only 1 centimeter dilated. I lost the pregnancy cool I’d worked so hard to maintain. I was miserable, itching nonstop, and a walking zombie. Watching my breakdown, my doctor quietly scheduled my delivery date.

The reality of an induced labor only made me cry harder. Friends had warned me about the procedure, and I’d read my chances of a c-section would increase. I was so nervous when we checked in for my induction, and when one nurse asked me if I was sure about my decision, I almost backed out. But I was ready for relief from the itching and to meet my daughter, so I went ahead with the induction. Labor was difficult, but I didn’t have a c-section. My daughter was born healthy and my rash started to clear up — it was completely gone by two weeks postpartum.

Three years later, though, I still have scars on my stomach and thighs. Even though induction wasn’t what I wanted, I don’t regret making that choice. Though if there was one thing I wish I’d done differently, I would’ve spoken up sooner and advocated for better treatment. I probably would’ve gotten a second opinion, too.

As a first-time mom, I was unsure of myself, eager to follow my doctor’s orders, and uncomfortable pushing back. Experience has shown me how important it is to trust my intuition, even when it goes against what my doctor says.