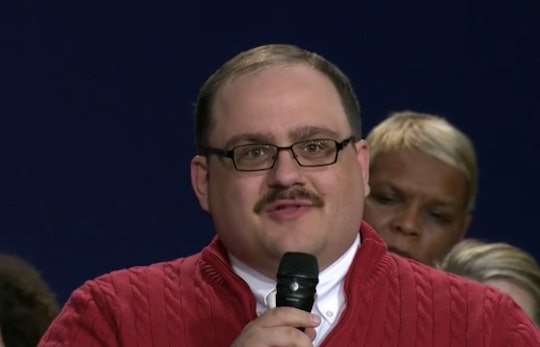 What Question Did Ken Bone Ask? He Was Interested In The Candidates' Energy Policies

While there's many differences of opinion on how the second presidential debate went, many people will agree on one thing: Ken Bone won it. A lot has been said about the power plant worker from Belleville, Illinois — although a lot of that talk has been about his red sweater, his name, his glasses, his mustache, and the disposable camera he used to snap pictures at the town hall debate on Sunday night. A more important thing to note, however, is the question Ken Bone asked at the debate.

Shooting to fame relatively quickly after the debate — he went on Jimmy Kimmel Live and gained over 119,000 followers in the ensuing days — Bone was, at first, unsure of who he'd vote for. According to The New York Times, Bone was originally leaning towards Republican candidate Donald Trump, but later told the newspaper that Democratic nominee Hillary Clinton "really impressed me with her composure and some of her answers last night."

The question Bone had for the candidates hit close to home for the power plant worker. Standing up and glancing at both candidates during the debate, he asked:

What steps will your energy policy take to meet our energy needs, while at the same time remaining environmentally friendly and minimizing job loss for fossil power plant workers?

He then went on to whip out his disposable camera and take pictures of the candidates. (In all fairness, smartphones weren't allowed at the debate, so the throwaway point-and-shoot wasn't a bad call.)

While he's understandably embraced the attention he's received from media and the public, answering questions about his wife and his outfits, he's kept his focus pretty clear. "I’m just trying to get the message out there to keep everybody involved in the political process," he told The Seattle Times. "It’s the most important election of our time."

Bone told The New York Times that his question was meant to "spark a debate about subsidies for environmental controls for older coal-fired power plants." (Bone works 12-hour shifts at one, so it's an understandable concern.)

He also told the newspaper:

I’m just glad I was able to spark the energy debate a little bit. It was kind of getting overlooked. ... I try to focus less on the negatives and more on the positives, and there haven’t been enough positives on either side for me to make a firm commitment.

Here's to Ken Bone for bringing an important topic to light. He might have an awesome red sweater and a groovy mustache, but he's also shined a spotlight on the difficult issue of handling both the environment and energy workers with respect.