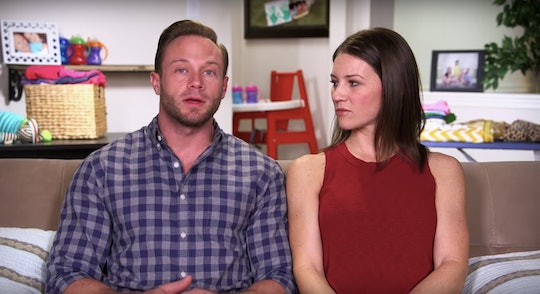 What Religion Are Danielle & Adam Busby? They Thank God For Their Adorable Family

It seems that American pop culture will always be obsessed with big families. For instance, TLC's OutDaughtered follows the Busby family and they are truly one-of-a-kind. As the show's fourth season winds to a close, new and old fans alike may want to know: what religion are Danielle and Adam Busby? This couple openly thanks God for their large family.

The couple are parents to six children altogether, with oldest daughter Blayke Louise born in 2011, according to TLC. In 2015, the Busby family was catapulted into the media spotlight after Danielle gave birth to five baby girls. As reported by The Christian Post, this constituted the first all-female set of quintuplets in the United States.

The quintuplets were delivered by C-section on April 8, 2015, at 28 weeks gestation, according to ABC News. Because of their early delivery, ABC News reported that the babies spent the first few months of their lives in the NICU at the Woman's Hospital of Texas. The quintuplets are: Ava, Olivia, Hazel, Riley, and Parker.

OutDaughtered originally aired on May 10, 2016. Since then, fans have watched the Busby kids grow up before their own eyes. And when it comes to thanks, Danielle has been clear on who she gives it to.

Before the quintuplets, Danielle and Adam struggled with infertility, as documented on their blog, "It's A Buzz World". The couple turned to intrauterine insemination (IUI) and, after two years of treatments, welcomed their first daughter, Blayke. Thanks to another set of IUI treatments, the Busbys welcomed their five girls into the world four years later, as they shared on their blog.

When going through any type of treatment, it's pretty common for people to turn to somebody. Support systems can take all kinds of shapes, but for the Busbys, it was clear their Christian faith played a big role. Danielle shared the role faith played during IUI treatments on the family's blog, writing:

I remember asking Adam one evening, "WHY?!?! Why must we go through all this again? WHAT is God teaching US this time?! WHAT are we supposed to LEARN this time around?!" One of the questions I asked God was "What is it this time … what do you want from me?" So many questions that I know I will never have the answer too [sic]… but sometimes you just have to express those emotions and cry out to God.

At the end of the blog post detailing the couple's infertility treatments, Danielle also wrote:

I have never captured this down and if you could see my face right now…how puffy, snotty and red-eyed I am… you would know how hard this journey was for us BUT how grateful we are for being blessed with everything God is providing and entrusting us with. As challenging as our infertility journey had been and as challenging as our future will be…I would not change anything about it. God knows our hearts and knows our needs and He will always be there to provide for us. Do not ever give up on God…YOU NEVER know how many blessing will come your way.

That important role of faith remained consistent, even after the quintuplets were born. "We are so thankful and blessed," Danielle said in a 2015 KHOU interview, according to The Christian Post. "I honestly give all the credit to my God." You can a clip from TLC of the whole family attending a church service for a dedication ceremony.

The fourth season of OutDaughtered comes to an end on Sept. 25. However, the family will be back for a fifth season, as reported by Country Living.

And for anyone that wants to keep up with them in the meantime, the Busby family are very active on their social media, giving fans an inside look into their lives with Blayke and the quints.