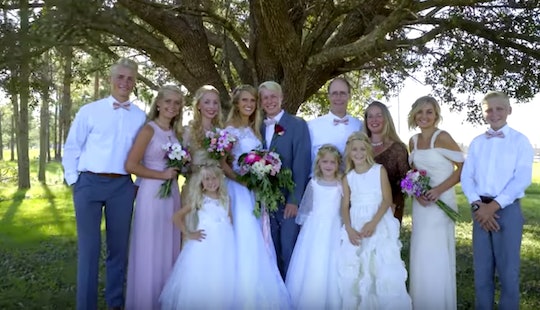 The family behind Welcome To Plathville, TLC's new reality TV series, live a fascinating life on a farm in rural Georgia. With limited access to the outside world, the children are homeschooled and haven't been introduced to things like soda and superheroes. Another interesting fact is that the Plath family is very religious and their faith plays a big role in their lives.

More Like This
Kate Middleton & Prince William Just Shared The Most Adorable Video With Their Kids
Queen Elizabeth Has Given Her Royal Approval For A New Line Of Beer
Exclusive: Teen Artist Tyler Gordon Reveals The “Ultimate Hero” He Wants To Paint
15 Of Jennifer Lopez’s Best Motherhood Quotes

Kim and Barry Plath, along with their nine children, are devout Christians, and cite their religion as helping them through tough times, including the accidental death of their 17-month-old son, Joshua. "In the fall of 2008 I was transplanting fruit trees with our Suburban, pregnant with our 8th child," Kim wrote in the family's website. "I looked for our 17-month old Joshua, saw that he was away from the vehicle, then pulled forward to get the next tree. In a panic, I realized what had happened. I ran over our Joshua... My husband Barry followed an ambulance home from work that day. Joshua died before he got there. I lived in Hell on earth."

In the aftermath of Joshua's death, Kim shared on their website that "God healed [her]" as she grieved. "I can’t explain it other than He re-wrote the bad coding in my brain. He took the ruts in my brain that had been running that same movie in my mind and filled them with His Spirit. The movie stopped. I wanted to live again. I was with my family again," she wrote. "God has been so faithful to our family for getting us through such a horrific event. He has indeed fully restored our joy."

Kim and Barry also credit their faith for bringing them together. "In the Spring of '97, on the exact same day, before either of us talked about it or showed any interest in each other, God revealed to Barry and I that we were going to marry," Kim shared on the family's website.

While the Plath kids might not be exposed to the same things as most American families are, they keep busy. For starters, they're incredibly talented musicians and have a family band, singing religious music. As a band, they have toured to different churches around the nation, including Baptist churches, playing their gospel and bluegrass music for masses. The family is so devoted to the gospel music they play, they turned down an invitation to a bluegrass music festival because they were "asked to incorporate less gospel music" in their set, according to The Post Searchlight.

The family also relies on their faith to help them make decisions. "Throughout we have sought God on major life decisions as well as the minor day to day choices," Kim wrote on their website. "He has taught us how to function as a family in unity."

Religion is clearly very important to the Plath family and an aspect of their lives that is showcased on Welcome To Plathville.