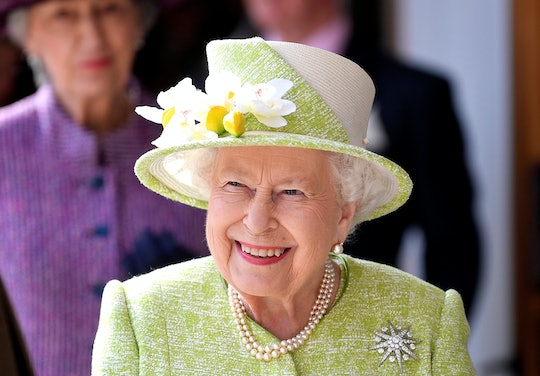 What Rules Has Queen Elizabeth Broken? More Than You Think

When it comes to royal family news, the younger generations are more often in the spotlight these days. It makes sense, considering Prince William and Prince Harry are in the midst of an eventful period in their lives — getting married, having babies, and making their marks in history. And every time I turn around, it seems like there's another article about some royal protocol either Meghan Markle or Kate Middleton has broken. Except, the reigning monarch has broken plenty in her own right. So what rules has Queen Elizabeth broken? It's probably more than you think.

To be fair, Queen Elizabeth II has ruled for longer than any other member of the British royal family. Ever. She took over as Queen at age 25, according to Cheat Sheet, after her father died in February 1952. Which means at 92 years old, she's ruled for more than 67 years. With this in mind, it only makes sense that she would have broken a few rules during her impressively long reign. But rules were meant to be broken, right? At least if you're the Queen. Let's take a look at some of the more notable rules Queen Elizabeth has broken/changed through the years. Such as ...

1. She Changed The Titles Prince Williams' Kids Would Have

As the Independent reported, Queen Elizabeth broke the rules regarding the titles Prince William and Kate Middleton's children would get. Back in 2012 — when Princess Charlotte was born — she issued Letters Patent, which decreed that all of Prince William's kids would have the "HRH" and "Prince/Princess" distinctions. Before, only the firstborn of a royal heir (so Prince George) would be a "Prince" or "Princess." The rest — Princess Charlotte and Prince Louis — would have merely been "Lady" or "Lord."

2. She Made Sex Irrelevant In The Line Of Succession

As Time reported the Succession to the Crown Act, which went into effect in 2015, changed the rules involving succession to the British throne. Thanks to this new rule, princes no longer take precedence over older sisters. This means Prince Charlotte remains fourth in line to the throne, and her younger brother, Prince Louis, is fifth in line.

3. She Invited Meghan Markle To Christmas Before The Wedding

According to Reader's Digest, Meghan Markle joining the royal family at Christmas was kind of a big deal. She wasn't yet married to Prince Harry in 2017, after all. And yet, she spent the holiday with the Queen. Which is a little awkward, considering Kate Middleton didn't come for Christmas when she was still just engaged to Prince William. (Play favorites much, Queen Elizabeth?)

To be fair, if you're going to break royal protocol, who better to do it with than Michelle Obama? The First Lady went in for a hug back in 2009, according to The Guardian — and surprisingly, the Queen hugged her back. Apparently, Michelle Obama didn't know about the protocol.

5. She Talked About Politics

Members of the royal family have traditionally remained apolitical — meaning they don't vote, and they've refrained from sharing their political opinions, according to Marie Claire. In January, however, the Queen made a thinly-veiled reference to Brexit during a speech, The New York Times reported. “As we look for new answers in the modern age, I for one prefer the tried and tested recipes, like speaking well of each other and respecting different points of view; coming together to seek out the common ground; and never losing sight of the bigger picture,” she said, according to the publication. “To me, these approaches are timeless, and I commend them to everyone.”

Basically, if Queen Elizabeth doesn't like the rules, then she gets a free pass to ignore them. Either that, or she just changes them. It's good to be Queen.