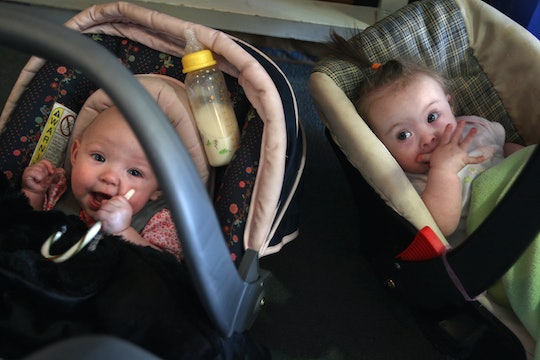 In its proposed 2018 budget, the Trump administration slashed funding to multiple agencies and programs, but there was one budget cut in particular that alarmed low-income families across the nation: If Trump's budget is passed in its current state, the Special Supplemental Nutrition Program for Women, Infants, and Children (known as WIC) will lose $200 million in funding per year. Those who are less familiar with the program may be wondering what the big deal is with cutting a portion of WIC's current $6.4 billion in funding. What services does WIC provide low-income families with, anyway, and shouldn't Americans be happy that the program isn't losing the entirety of its funding?

The thing is, WIC plays an essential role in improving women and children's health across the country, and the program is already under stress. The program is designed to lower infant and maternal mortality and morbidity rates in the United States, according to The Guardian, and it provides states with grants for "supplemental foods, health care referrals, and nutrition education" for low-income pregnant or postpartum women and children up to the age of 5.

Women participating in WIC gain access to supplemental nutritious food, nutrition education and counseling, and referrals to health, welfare, and social services. And those services have made a difference in both women and children's health, as well as states' health care costs: according to the USDA, investment in WIC has resulted in fewer infant deaths, higher incidences of breastfeeding, and better growth rates and intellectual development for nutritionally at-risk children.

Cutting $200 million from WIC won't end the program by any means, of course, and according to The Guardian, WIC should still be able to supply its current caseload with the vouchers they need. However, the reduced budget could limit WIC's education programming, counseling, and breastfeeding support.

There's also the fact that WIC is already hindered in how many participants it can take on. In 2013, for instance, WIC could only serve approximately 83 percent of the infants eligible for the program, according to The Guardian. But it's not necessarily because WIC doesn't have the budget or because it lacks the ability to reach those remaining infants: many people who qualify for WIC don't actually know that they qualify, or those who do qualify may not be interested in participating, according to the program's website.

A $200 million cut doesn't mean the WIC program will shut down — but if Trump's budget is passed, fewer women, infants, and children will have access to much-needed nutritious foods and education. The WIC program already serves one in two babies in the United States, but they're still not able to take on all of the low-income Americans that need their help. Considering the many services WIC provides and the benefits it imparts, it would be great to see the program be able to take on all the moms and kids that need its help.