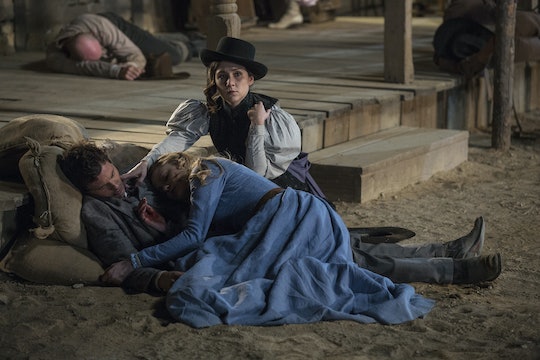 What Shakespeare Play Is The "Violent Delights" Quote From On 'Westworld'? It's Popular

Shakespeare enjoyed a good motif in his writing and so does Westworld, the ambitious new series on HBO that sets out to explore the very meaning of humanity itself. One of the motifs constantly referred to in the series is the quote "These violent delights have violent ends," which appear to be the magic words that make the hosts wake up and become self-aware. In the premiere episode, when they are spoken by Abernathy to Dolores, the engineers figure out that he knows them because in one of his past jobs as a host, he was a professor of Shakespeare. What Shakespeare play does the "these violent delights..." quote come from? Trust me when I tell you, you've heard it before.

While it sounds dark enough to have come from something like Macbeth, this quote actually comes from possibly the most famous Shakespeare play ever, the tragedy of Romeo and Juliet. It is from Act 2, Scene 6, in which the Friar is marrying Romeo and Juliet at long last, in a surprisingly hurried scene. Romeo is urging the Friar to get them married as quickly as possible, and the Friar warns Romeo that all his hastiness may turn out very badly for him. Obviously the Friar was right (although it can be argued that the couple's death was all his fault, really).

These violent delights have violent ends/And in their triumph die, like fire and powder,/Which as they kiss consume: the sweetest honey/Is loathsome in his own deliciousness/And in the taste confounds the appetite:/Therefore love moderately; long love doth so;/Too swift arrives as tardy as too slow.

Basically, what this means is that the friar is warning the young couple that getting all "Crazy In Love" is going to backfire in a very big way. The more violently passionate their love, the more likely it is that it will all end in death. He advises them to chill, essentially, as loving moderately is more likely to end in happily ever after. Clearly he was right, as Romeo was so distraught at finding Juliet dead that he went and impulsively offed himself. And then when she woke up, she did the exact same thing.

The parallels to Westworld are pretty obvious. The more violently the guests enjoy themselves at the park, via rape and pillage and general excess, the more likely it is that the hosts will eventually fight back. And it is not going to end well at all.