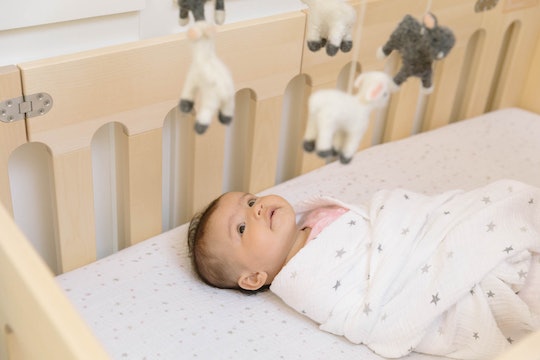 Babies aren't like you and me. For one thing, their digestive systems are brand new and still working out the kinks of eating, burping, and yes, passing stool. For new parents, baby poop can be an exciting, strangely colorful affair (Canary yellow, anyone?), but what should baby poop look like? Turns out, your baby's poop can tell you a lot about their health and which startling pigments and hues should get you dialing your pediatrician.

According to pediatrician Dr. Jarrett Patton of Pennsylvania, greens, yellows, and browns are the most common colors of baby stool, but orange (or even blue and red, if your baby's consuming treats tinted by artificial colors) isn't cause for alarm. In fact, generally speaking, only one color of baby poop seriously concerns Patton: "Beware of a white or pale-colored stool," he writes in an email interview with Romper. White poop could indicate a medical problem affecting their digestion, and if you find a chalky white or gray in your baby's diaper, you should call your doctor right away.

Interestingly, there's a big difference between formula and breastfed babies when it comes to stool. According to Parents, breastfed baby poop is most often a bird-seedy yellow or yellowish green. For newborns, that yellow tint is a good sign — it means they've transitioned to digesting mature breast milk, not colostrum or early milk. (You can expect to see the yellow edge of the rainbow within a week after birth.) If your breastfed baby's poop is a very bright, vibrant yellow, the color could be related to your own diet or the medications you take, reported The Bump, and no cause for concern. As WebMD reported, a breastfed baby's poop is also generally thinner, even diarrhea-like.

In general, formula-fed infants have a slightly darker stool than their breastfed counterparts: think green-ish brown or deep yellow on the spectrum of normal. If your baby's poop is a greenish tan, however, and they're fussing more than usual, the color might indicate a cow's milk allergy, noted The Bump, and that's definitely a reason to get them checked out.

Likewise, a deep, Ninja Turtle Green might be your baby's reaction to the iron in formula, or to an iron supplement if she's taking one. Green baby poop that shows up between 4 and 6 months might just reflect her new diet of healthy mashed greens, according to Unity Health. As baby's ability to digest all that nutrient-rich spinach improves, the color of her stool will also become a recognizable brown. Just don't be surprised when green poop shows up again several months later after baby's first bite of un-puréed broccoli.

In fact, it's when baby starts solid food that you can expect the most color from their poop. (It's also extremely smelly, which I promise you'll get used to.) Greens, blues, yellows, and oranges, as well as undigested pieces of food, are a sign of how your baby's belly is confronting new meals.

What about red flecks in baby poop? As The Bump reported, small red flecks aren't usually a sign of a medical problem, though they might indicate that your baby is a bit constipated and straining. For breastfeed babies, bits of red are likely swallowed blood from cracked nipples. Truly bloody or bright red stools, however, should prompt a phone call to your doctor, because you might be looking at an allergy or intestinal problem.

Chalky, gray, or white baby poop should always be considered a warning sign, however. Also look out for slimy green streaks of mucus, which might mean an infection. Pebbly, hard stools are often associated with a food intolerance, noted Unity Health. Finally, very runny poop puts your baby at risk of dehydration, so visit your doctor if they're struggling with persistent diarrhea.

When your baby's tiny tummy greets the world of gourmet tastes and flavors, you can truly expect the colors of the rainbow in that diaper. That said, most colors don't mean anything is truly wrong. If you ever feel that something's off with your baby's stool, however, I can tell you from experience that pediatricians (amazingly!) have infinite patience for your baby poop color questions, because they know, just as you do, that poop has a lot to tell us about the inner workings of the body — and that's a good thing.