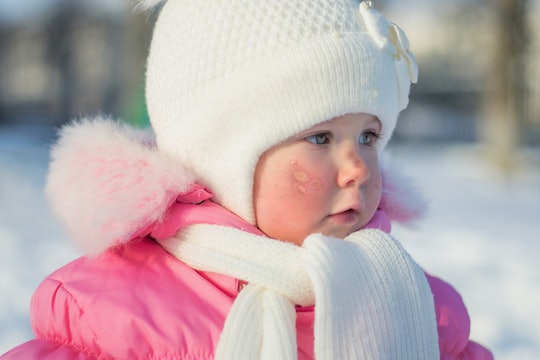 Playing in the snow is one of the greatest joys of winter. Living in the Northeast, I live for the excitement of that crunch of fresh powder beneath my boots, and my children are equally enamored of cold weather fun — they love building snowmen and eating dirty snow they probably should not be eating. It's mostly all fun and games, but there is real danger in the freezing fun — frostbite. It's dangerous and can have devastating consequences, which is why it's so important that parents know what to do if their kid has frostbite.

Frostbite is, according to the Centers for Disease Control and Prevention (CDC), "a serious condition that's caused by exposure to extremely cold temperatures," and "a bodily injury caused by freezing that results in loss of feeling and color in affected areas." It most often affects the cheeks, nose, lips, fingers, toes, and ears, but that doesn't mean it can't affect other areas. It just means that by the time it usually reaches other parts of the body, the cheeks, nose, and extremities have already been affected. And if you suspect your child has frostbite, there are no ifs, ands, or buts — you need to call your pediatrician immediately.

But how do you know frostbite is happening? I contacted Dr. Niket Sonpal a NYC internist and gastroenterologist, and he tells Romper, "First, parents may see redness. This is early frostbite or 'frostnip.'" Chances are if you live where it gets cold, you've felt the pins and needles feeling of frostnip. If you can, explain to your children what that feeling means. According to Sonpal, your children "may say their skin feels tingly and even a bit numb. As skin becomes more frostbitten, it will shift to a yellowish tone, then it turns white, which is an indication that the frostbite is more serious with possible tissue damage." This is a critical stage, as Sonpal points out that hypothermia could be setting in, and treatment is essential.

"The rule of thumb for parents is to play it safe and quickly warm up the skin as soon as they see a change in skin color and when the kid complains about feeling any pain," Sonpal says. After that, the condition increases until the child loses use of the affected area, and they are at real risk for permanent injury or amputation.

When it's time to intervene, you need to get your child into a warm environment, with warm, dry clothing. Give your child something warm to drink, too, and Sonpal advises avoiding the temptation to rub the skin. "Many parents' first instinct is to quickly rub hands, cheeks, feet in an effort to warm them up through friction. You want to avoid rubbing, but instead place or hold the area in your hand."

And don't sit them in front of a radiator, as my grandmother was fond of doing, or space heater or fire. Sonpal says that this is "another logical yet potentially harmful instinct. This extreme shift from freezing to hot can harm the skin." He says that instead, parents should fill "a basin or tub of warm water" and have their children dunk their feet or hands in it for 20 to 30 minutes. Doing that should help to soothe the frostbitten areas. But Sonpal cautions that you should "be sure not to have water too hot, as this will do more harm than good to skin." If the frostbite happens to be on your child's nose, chin, or cheeks, he suggests applying a warm compress.

As someone who's had both frostnip and superficial frostbite more times than I care to admit, I can tell you the recovery is painful; it's nothing you want your kid to experience. Growing up in Northeast Ohio, frostbite was something that I knew a lot about early on — it's the boogie man who lives in the snow, the dementor hovering over your sled, ready to suck all the joy from your day. As a parent, I view it quite differently. Yes, it's still something that stops a day in its tracks, but the fear is more real and less ephemeral. You simply need to know what you should do if your kid has frostbite so that you can keep enjoying the snow in the future, and prevent it from happening.

Frostbite can develop in a matter of minutes, according to Britain's National Health Services. The colder it is outside, the quicker your body reacts to it — and children are more at risk than adults. If you think your child is developing frostbite, get them inside, and call their doctor right away. It's too serious to ignore.