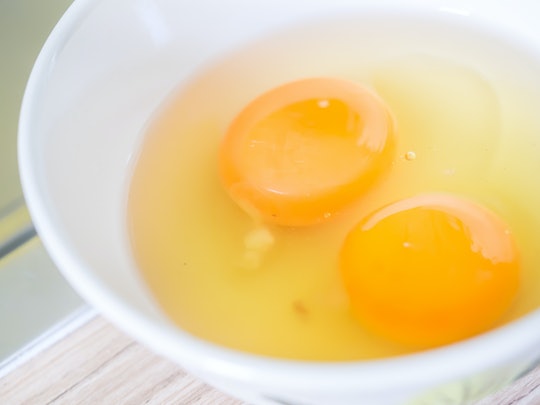 Everything You Need To Know About Tracking Your Cervical Mucus

Learning to read your body's fertility signs can be a daunting process; almost like taking up a brand new hobby or unfamiliar college course. Once you get past the initial learning curve, it becomes much easier for most women, but you have to stick with it long enough to get there. Whether you're studying your fertility symptoms in hopes of achieving or avoiding pregnancy, there are some core basics that you need to know, the most important of all being the answer to the question, "What should my cervical mucus look like during ovulation?"

Most women's bodies follow a rhythm of fertility that can be traced along a 28-day (give or take) pattern, and every month our cervical mucus reflects that pattern. Suzanne Munson, a natural fertility expert for Fairhaven Health, tells Romper in an exclusive interview, "The production of cervical mucus is at its lowest immediately following your period, and some women report 'dryness' during this time. But, over the next several days, more mucus will become present and it will likely be yellow, cloudy, or white in color, and somewhat sticky to the touch. As you enter your fertile window, your cervical mucus will increase in quantity and moistness. Color may be cream-like in appearance."

According to Dr. Shahin Ghadir, MD, a founding partner of the Southern California Reproductive Center, all women should learn to pay attention to the signs of good ovulation, including observation of cervical mucus, especially if they are hoping to become pregnant. In an interview with Romper, Ghadir notes that, "When a woman is not ovulating, this watery cervical mucus should not be present. Instead, there should be the normal whiter vaginal discharge. Women with irregular cycles who are generally not ovulating may have issues with cervical mucus production."

But if you're not consciously observing, you may miss the signs, hence Ghadir's sincere urging for those trying to conceive to keep tabs on what's going on down there. It very well could save you months of frustration and lots of lettuce in medical co-pays. To that end, many women (myself included, even when my goal is avoiding pregnancy) find it helpful to keep a fertility chart each month, whether with an app on their phone or on paper.

Still confused on what the point of cervical mucus actually is? It's more valuable than you might think, says Munson. She points out that this weird bodily excretion actually helps the sperm pass into the fallopian tube for implantation, provides protection and nutritional support for the sperm, neutralizes acidity in the vagina when a woman is fertile, and prevents infections. Not bad for something that looks like the inside of my preschooler's Kleenex.

The bottom line of cervical mucus observation is that, "The amount and consistency of cervical mucus changes during a woman's menstrual cycle," Munson tells Romper. "By observing these changes in cervical mucus throughout the month, a woman can predict ovulation and her most fertile time for achieving pregnancy."

If nothing else, simply remembering that fertile mucus looks a lot like your pre-scrambled eggs in the morning goes a long way. But to fully maximize the benefits of this method, you'll want to take the time to really study it. And hey, maybe learning about it together with your partner will light a fresh spark in the bedroom. Nothing says sexy like science.