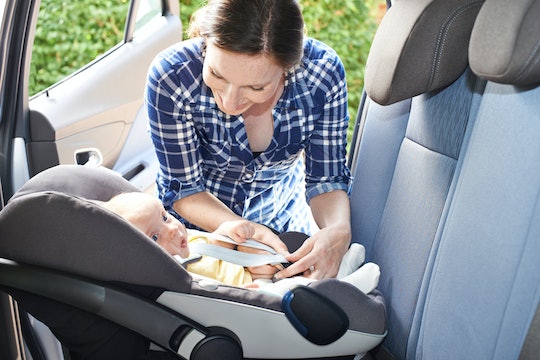 What Should You Look For When Buying An Infant Car? 5 Guidelines From Experts

When I was expecting my first baby, car seat shopping felt unduly stressful. I mean, they won't let you leave the hospital without one — for good reason — but which one is actually safest (and which hunk of titanium safety can we actually afford)? In the end, we chose a pretty expensive titanium hunk, and cheaped out on the stroller, because driving seemed way riskier than strolling. But what should you look for when buying an infant car seat?

There are some recommendations, but keep in mind that the safest seat depends on your child's age, weight, and whether or not it's been properly installed. "Car seats are very often used or installed incorrectly," Lisa Strickland, a car seat safety specialist, tells Romper in an email interview. So ultimately, "the best car seat is one that fits the child, fits the car, and is used properly every time."

Strickland recommends reading your manual and consulting with a child passenger safety technician (CPST), even if you've read your car seat manual cover to cover. You can find a certified CPST in your area at http://cert.safekids.org. With the right car seat and a little know-how, you'll be set to take your baby on the road. (Pro tip: don't forget the diaper bag.)

More Like This
6 Bizarre Superstitions About Christmas Babies
Baby Growth Spurts: When They Happen & What To Expect
When To Stop Swaddling Your Baby: 8 Signs It’s Time To Transition
41 Strong & Sweet Baby Boy Names That Start With “K”