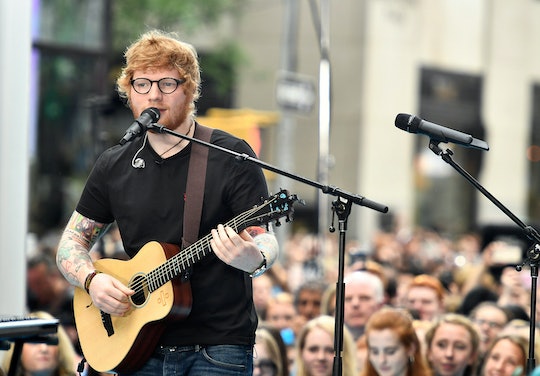 This Is The Song Ed Sheeran Sang On 'Game Of Thrones'

In Ed Sheeran's Game of Thrones cameo during the Season 7 premiere, he provided the episode with a little musical interlude — which was really to be expected. But what song does Ed Sheeran sing on Game of Thrones? It's actually one that fans of the books should be familiar with.

Sheeran's cameo came about while Arya was traveling through the woods after leaving the Twins, where she had massacred what remained of House Frey. She stumbled upon a group of Lannister soldiers eating around a campfire and having a bit of a singalong before they continued to ride toward where Arya had just come from, planning to investigate what happened. A solider played by Ed Sheeran was singing, and Arya immediately had the question any Sheeran fans tuning in also had: What was that song? He identified it only as a new one.

It actually wasn't new, though. Book fans may have recognized some of the lyrics in Sheeran's song, which included the lines, "For hands of gold are always cold, but a woman's hands are warm." In George R. R. Martin's A Song of Ice and Fire series, the song "Hands of Gold" is sung by Symon Silver Tongue. Whether that character has any connection to Sheeran's unnamed soldier is unclear at the moment, but the song definitely has book origins.

In the books, Symon Silver Tongue was a singer and actor whom Tyrion met at Shae's one day and didn't like on sight. His dislike was compounded by the fact that Symon knew too much about Tyrion and Shae; he could have easily spilled the beans about their relationship to Tywin and Cersei. Symon wanted to perform at Joffrey and Margaery's wedding, but Tyrion thought it was too dangerous for Shae, so Symon decided to blackmail him via song. The lyrics of "Hands of Gold" refer, presumably, to the gold hands Tyrion wore as Hand of the King; the woman's hands were Shae's. It was Symon's way of making it clear that he would use the information he had to his benefit if he could. Tyrion promptly had him killed.

It's unlikely the song's book origins play into Sheeran's character too much outside of the Lannister connection they share; the events the song referred to happened long ago on the show, and the scene with Arya in "Dragonstone" didn't allude to them in any other way. It seems more plausible that people behind the scenes decided to give Sheeran a song from the books that they hadn't had a chance to utilize before.

Then again, maybe it's a hint that Tyrion's past will be coming back to haunt him. We'll see soon enough. Thanks, Ed Sheeran.