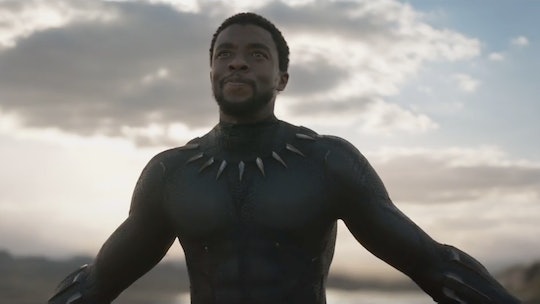 Anticipation is increasing daily for Marvel's upcoming Black Panther as its February 16 premiere date draws nearer, and a new trailer was released on October 16 that gave fans a better look at what's to come. Though getting glimpses of characters, sets, and costumes is incredibly exciting, some viewers might have found themselves intrigued by the music as well. What song is playing in the new Black Panther trailer? It seems to be a mashup of a more recent song and an older spoken word piece, both fusing together to create something as new and exciting as Black Panther.

In the trailer, Gil Scott Heron's 1971 piece "The Revolution Shall Not Be Televised" is combined with rapper Vince Staples' song "BagBak." Heron's spoken word song-slash-poem is notable for its political commentary, and it has spawned countless covers and references over the years, which is fitting because it contains more than a few references of its own to the cultural landscape of the time. It became an important song in the black power movement and the Library of Congress referred to it as "a timeless social critique and as a unique musical expression, one in which the founding modern strands and themes of rap and hip-hop can be heard."

That makes its inclusion in the Black Panther trailer fitting in a few ways. It's 70s origin is a nice nod to the comic roots of the Marvel character, and its political significance can't be ignored either. Though the Black Panther comics tried at times to distance themselves from politics (and specifically the revolutionary group that they coincidentally shared a name with), it wasn't something that could be easily avoided. Sometimes it was even embraced, like the storyline in the late 70s that featured T'Challa fighting the KKK.

The inclusion of Heron's "The Revolution Will Not Be Televised" in the trailer is a subtle way to honor Black Panther's long history, while Staples' "BagBak" brings everything into the modern world. "BagBak" has also been praised for its political commentary, with Pitchfork calling it a "sub-3-minute gut-punch that brings his hip-hop braggadocio to the world of protest music." Staples referred to his album Big Fish Theory as Afrofuturism in a now-deleted tweet, though he later wrote his comment off as trolling. He may have been joking, but the connection to Afrofuturism makes "BagBak" an even more fitting choice for the upcoming Marvel film.

Black Panther has been seen as representative of Afrofuturism, which the Huffington Post defined (based on the words of anthropologist Niama Safia Sandy) as an aesthetic that combines science fiction with African history. It's easy to see how that seems to describe Black Panther perfectly, especially with the high-tech African kingdom Wakanda as its principle setting. The music in the new trailer acts as the perfect complement to the many themes of the film, as well as its many decades of history in the comics.

Both Heron's and Staples' music blend together effortlessly in the trailer and perhaps even indicate what kind of film Black Panther might be: one that doesn't shy away from referencing what's happening in the real world and recognizes just how important its lead character is. The significance of T'Challa as a black superhero cannot be understated, especially in a franchise that hasn't exactly been diverse, and the music reflects that.

It's not clear yet whether either song (or the mashup of both) will find its way onto the official soundtrack for the film since its release date hasn't even been announced. But Heron and Staples' music can be found online in their solo formats, so fans can enjoy both songs as excitement continues to build for Black Panther.