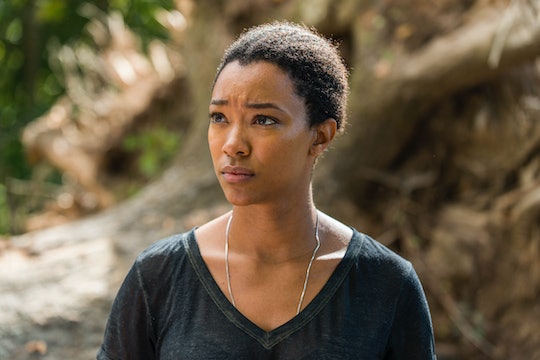 Sasha Listens To A Meaningful Song On 'The Walking Dead'

The Walking Dead Season 7 finale opened with a close-up of Sasha's face as she listened to a song, and that moment was repeated every time the show came back from commercial. Sasha would be shown listening to the song, then saying some key line that would lead into a flashback of a moment she shared with Abraham shortly before his death. The repeated scene definitely seemed to be significant, even if it wasn't totally clear why at first. But what song was Sasha listening to on The Walking Dead?

The song was Donny Hathaway's "Someday We'll All Be Free." The song was released in 1973, and it gained added significance years later when Spike Lee used it over the credits of the biopic Malcolm X. The lyrics are about staying strong and not letting the world get you down, which definitely had relevance to Sasha's story and her struggle to decide what to do while she was Negan's prisoner. She could either join forces with him or die, and the song captured her need for freedom. With lyrics like "never mind your fears / brighter days will soon be here / take it form me, someday we'll all be free," it was easy to see why the song might have given Sasha some comfort.

It was particularly clear why she needed that comfort when the show revealed just where Sasha was as she listened to the song. She was being transported from the Sanctuary to Alexandria in a casket, where she finally swallowed the poison pill that Eugene gave her while she was imprisoned. The song was the last thing she chose to listen to as she died. Then, when Negan opened the casket to reveal her to the assembled Alexandrians, Zombie Sasha popped out and tackled him to the ground. In a roundabout way, Sasha was able to go out fighting, just like she wanted.

The show has made use of music in notable ways before (viewers are still recovering from the incessant "Easy Street") and giving Sasha an extended scene set to a memorable song allowed the show to give her death the focus it deserved without revealing the surprise. Many fans guessed that the scenes of Sasha listening to "Someday We'll All Be Free" signified her death, but it was unclear enough that the moment she emerged was still effective. It also injected an odd bit of hope into the story as Sasha's death gave her people the edge they needed to briefly get the upper hand. The choice of song reflected that hope.