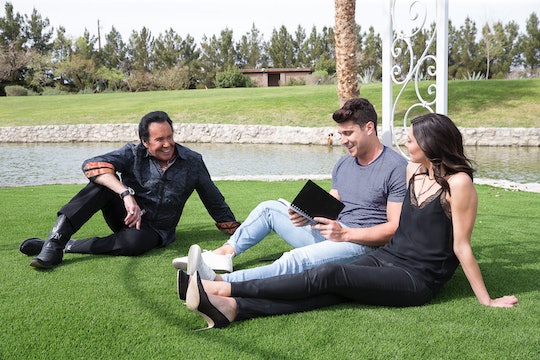 You've *Definitely* Heard Of This Next 'Bachelorette' Guest Star

In case, between Lil Jon and Richard Marx, viewers didn't get enough of guest stars this season, another legend will grace their TV screens on Monday: Wayne Newton. The singer and entertainer will help the men on a group date. If you're scratching your head thinking, "Wait, what songs does Wayne Newton sing?" you're not alone, but you'll probably recognize his songs if you hear them. He's known as "Mr. Last Vegas," "Mr. Entertainment," and the "Midnight Idol."

According to Newton's biography, he's been singing since he was a child. He would sing with his older brother during those formative years and went solo in the 1960s. During this decade his most famous song, "Danke Schoen," was released in 1963.

Later hits of Wayne Newton include "Daddy Don't You Walk So Fast" from 1972, "Years" from 1980 and "Red Roses for a Blue Lady," which was previously recorded by powerhouses like Dean Martin. Personally, as a ~millennial~, the only song I've heard of Newton's is "Danke Shoen," but I may be alone in that. After all, he is Mr. Entertainment. He first played Las Vegas in his junior year of high school, and it seems like he hasn't stopped since.

Of course, it hasn't always been roses for Newton. While he had been a popular performer for decades at this point, Newton filed for Chapter 11 bankruptcy in 1992 for $20 million. According to a Los Angeles Times article at the time, this was due to bad investments.

Thankfully, by 1999 Newton had bounced back with a gig that made him the highest-paid star in Las Vegas at that point. That wasn't the end of his tax troubles, though. In 2005 the IRS claimed Newton and his wife, Kathleen, owed more than $1.8 million in taxes and penalties. In a statement at the time both said, "We have paid millions of dollars in taxes, so obviously it is not a matter of money but a matter of principle."

Besides his career as a singer and entertainer, Wayne Newton is known for his lavish estate, Casa De Shenandoah. While the estate fell into bankruptcy on its on in 2012, that seems to have bounced back as well. In fact, according to Broadway World, Becca's guys will be visiting the estate on their group date.

Most recently, the couple was in the news not for financial issues, but something else pretty frightening: burglars tried to rob their home just this month. They ran off once the Newtons arrived home from his music gig, but that didn't stop the couple from taking precautions to stay safe in the future. They told the Las Vegas Review-Journal, "We are grateful for the officers’ fast response and attention to this incident ... We are confident that our home surveillance video will lead to the apprehension and arrest of these individuals." They have since upped the security on their home.

Both Newton and Shenandoah will make an appearance on The Bachelorette, according to Broadway World. Nine of the men will get to see the amazing estate on a group date. Plus, the contestants will rewrite the lyrics to "Danke Schoen" in order to display their love for Becca. Seems like a cute date to me, and to be in the presence of such a legend will be exciting to watch.

After the strife from this season unfolding off screen — such as Garrett's social media controversy and Lincoln's past getting out in the open — I'm sure Bachelor Nation will be relieved to see something relatively drama-free (I hope). Who knows, a contestant may be a great songwriter and he doesn't even know it. As the season goes on, Becca's choices over who to keep and who to let go will be harder, and I think it'll start with this episode in Las Vegas.