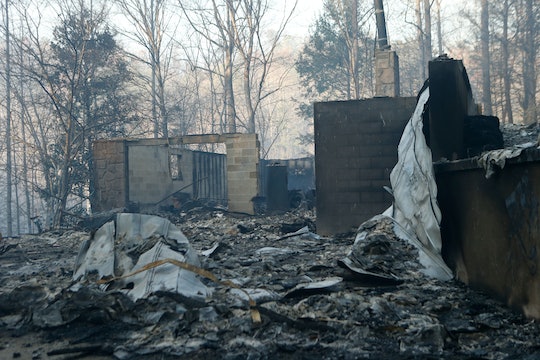 What Started The Tennessee Wildfires? Authorities Believe 2 Juveniles Were Involved

Massive flames and clouds of smoke threatened the town of Gatlinburg, Tennessee last week as wildfires continued to spread throughout surrounding areas, leaving immense damage in its wake. The fires burned down homes and businesses alike, and some of the city's residents did not survive. Just one week later, details about the fires are starting to emerge as investigators learn more about what happened. Now, not only are investigators becoming more sure of what started the Tennessee wildfires, they may also reportedly know who started the wildfires.

The wildfires, which first began on Nov. 25 in eastern Tennessee, had devastating consequences. According to CNN, the fires burned down around 15,000 acres of land, destroyed or damaged businesses in several communities, and killed at least 14 people. More than 14,000 people were forced to evacuate Gatlinburg and the surrounding areas, according to The New York Times.

According to The Weather Channel, the blaze was "the worst wildfire disaster in Tennessee in a century." Considering the scale of the devastation, one might expect the fire to have been started by something equally as impactful, however that may not have been the case. According to The Washington Post, authorities believe the cause of the wildfires was arson and that the blaze was allegedly ignited by two juveniles who were taken into custody on Wednesday morning. No more information was given about the suspects who could have potentially caused one of the biggest wildfires that Tennessee has ever seen.

The two juveniles in custody are facing charges of "aggravated arson" in connection with the fires, according to CNN, and more charges could be considered. The juveniles could also possibly be transferred to adult criminal court. According to The Washington Post, the investigation is still ongoing.

The Knoxville News Sentinel reported that the fire began at the Great Smoky Mountains National Park on the Chimney Tops Trail. The fire then rapidly spread to Gatlinburg and surrounding areas due to high wind speeds of up to 80 miles per hour. These high winds helped the fire grow, according to The New York Times. At first, the fire had been suspected to have been caused by "human hand," according to The Knoxville News Sentinel, but it was not known for sure at the time whether the fire was accidental or arson.

Much remains unclear around the juvenile's motives, but one thing is known for certain — the damage the fires caused in the small Tennessee tourist towns is extensive. According to The Knoxville News-Sentinel, more than 1,700 homes or businesses were damaged or burned in the fire. The Texas Bureau of Investigation hopes that victims of the fire will receive closure as new details emerge. "Our promise is that we'll do every effort to help bring closure to those who lost much," TBI director Mark Gwyn told The Sentinel.

Putting people in custody will never bring back the things incinerated by the wildfires or restore those lives taken — but it could bring answers to the desperate questions that remain and bring closure to those who lost everything.