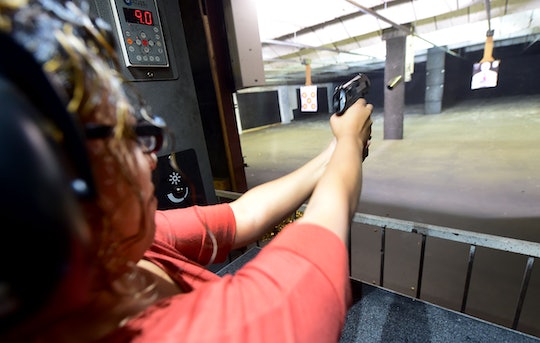 What States Allow Teachers To Be Armed? It's A Controversial Proposal

Almost four years ago, tragedy struck a small town in Connecticut. On Dec. 14, 2012, 20-year-old Adam Lanza entered Sandy Hook Elementary in Newton and opened fire, killing 20 children and six adults. In the weeks following the shooting, there was an outcry for an adjustment to American's gun laws. One proposal floated at the time, The Huffington Post reports, was that teachers should be allowed to carry weapons into their classrooms, in case they need to protect themselves and their students. The response to this solution was wide and it is still a heavy point of discussion to this day. There are those who believed teachers bringing guns to school would make their children safer, and others who were staunchly opposed. After a school shooting on Wednesday in Anderson County, South Carolina, the debate is back on in earnest. Currently, nine states allow teachers to carry guns in the classroom, and that number may continue to rise.

These states — which include Idaho, Utah, Oregon, Texas, Wisconsin, Arkansas, Mississippi, Kansas, and Colorado — allow teachers to carry a concealed weapon on school and university campuses. This policy is known as "campus carry," which permits licensed gun holders to bring their concealed weapons to campus, dormitories, and other residential facilities. The campus carry laws vary from state to state. While nine states actually allow teachers to carry weapons inside the classroom, there are even more that have similar policies.

CityLab reports that an additional nine states allow concealed weapons to be carried in school parking lots and kept in locked cars. Twenty-one states allow individual schools and universities to decide for themselves if they will permit teachers to carry concealed weapons in the classroom. There are only 11 states in the country that have laws which prohibit carrying handguns on school or university property.

It's a popular belief that if more people are armed, there are therefore more people able to stop attacks, such as the one in Newtown or the one in South Carolina, from happening. The American Journal of Public Health reports that this is simply not true, adding that "states with higher rates of gun ownership had disproportionately large numbers of deaths from firearm-related homicides." They also reported that every time gun ownership rates in a state increase, the firearm homicide rate also increases.

A study done by researchers at Boston Children's Hospital, Harvard Medical School, and Harvard School of Public Health concluded that states with the strictest gun control laws had lower rates of gun-related deaths. In this instance, researchers tracked states' legislative strength through the Brady Center to Prevent Gun Violence. They studied each state's ability to curb firearm trafficking, strength of background checks on people purchasing firearms, children's safety, whether military style assault weapons were banned, and how much guns were restricted in public places. The states that were able to employ strict gun control saw the lowest amount of gun related homicides and suicides, proving that the theory of more guns equals less violence does not hold up.

It is completely understandable to want to find a solution to the epidemic of gun violence in America. No parent should have to send their chid to school and worry that they won't come home in the afternoon. It's unfortunate that this discussion has come so far to even have to suggest that school teachers arm themselves in their classrooms. Schools should be a safe haven for children and teachers alike. We should feel safe in our movie theaters and our malls, as well. Stricter gun laws have been proven to be effective, yet only 11 states ban concealed carry on school campuses outright.

Gun violence is a disproportionately large problem in the United States compared to many of our peers, such as Switzerland and Germany. Campus carry is a flawed solution to a very real problem. Gun control and gun violence is a major issue on table in the upcoming election. If you want to see a change in our country's gun laws, make sure you get out and vote on Nov. 8.