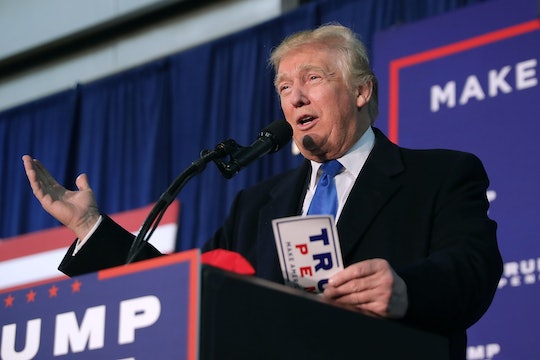 What States Does Trump Need To Win? There Are Three Critical Clinchers

Republican presidential nominee Donald Trump definitely has a path to the White House, but it's not a straightforward one. Leading up to Election Day, pundits posited a number of pathways Trump could take to lock up 270 electoral votes. But if he really wants to make it to the Oval Office, what states does Trump need to win? Though there are multiple ways for the campaign to move forward, there are three states Trump can't afford to lose.

The Washington Post and Politico agree on the three states Trump must win: Florida, North Carolina, and Ohio. Florida is perhaps the most critical, according to The Washington Post. Because it offers more electoral votes than North Carolina and Ohio, Florida is virtually essential to Trump winning the election. Luckily for Trump, Florida tends to lean in his favor. And while Ohio's gone back and forth (currently giving Trump an edge), Democratic presidential nominee Hillary Clinton tends to lead in North Carolina.

If Trump can secure the combined 62 electoral votes of the three essential states, he'll still need swing state support in order to get where he wants to go, Politico reported. Winning Pennsylvania would be ideal: if Trump wins his three critical states and most current electoral college map predictions are accurate, a win in Pennsylvania would likely put him over the 270 votes he needs. But given Trump's struggles in the state, it seems he'll need to aim for a combination of wins in swing states potentially including Iowa and Nevada.

During a campaign season this unpredictable, it's safe to say that anything could happen to shift public opinion before polls close. For now, it does seem that Clinton has the smoother road forward: according to The New York Times, Clinton is already favored to win states that would give her the 270 electoral votes needed. But if Trump can win in Florida, North Carolina, and Ohio, there may still be a number of ways for him to get enough support to be president.