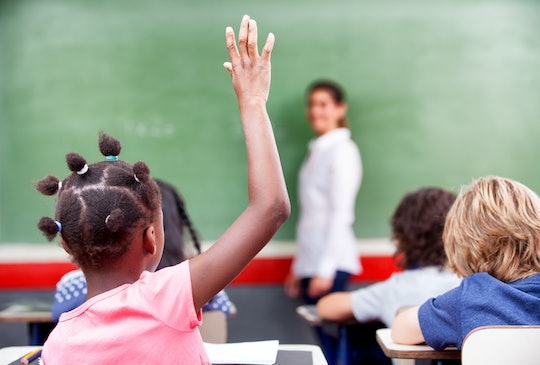 Public schools in Florida will now be required to add mental health classes to their curriculum, following a vote by the state's Board of Education. While many states require schools to offer physical education and/or nutrition classes, few have moved to put mental health on teachers' lesson plans. So, what states require mental health education in schools? Florida is joining an unfortunately short list.

Laws implemented in 2018 made New York and Virginia the first states to make mental health education a mandatory requirement in public schools, according to CNN. While New York opted to add mental health education to the health curriculum taught in elementary, middle, and high schools, Virginia added it only to the course load required for ninth and 10th graders, CNN reported.

While Florida's recent turn toward mandatory mental health education isn't the result of a bill passed by state legislators, it achieves the same purpose: giving students every tool needed for a successful life. According to a press release from the Florida Department of Education, the new regulation will require all public schools in the state to provide a yearly minimum of five hours of "youth mental health awareness and assistance" instruction to students in grades six through 12.

"This is just the beginning. It's no secret that mental illness robs students of the ability to reach their full potential, and we are joining forces to combat this disease and give our students the tools they need to thrive," Florida's Commissioner of Education Richard Corcoran said in a statement released by the state's Department of Education. "We are going to reinvent school-based mental health awareness in Florida, and we will be the number one state in the nation in terms of mental health outreach and school safety."

The department went on to note that instruction must include information about recognizing the signs and symptoms of various mental illnesses, talking to those struggling with their mental health, how to get help or assist others in getting help, and build awareness around available resources, like the National Suicide Prevention Hotline.

A summary of the rule noted that "quality mental and emotional health education" had been "identified as a high priority" by Gov. Ron DeSantis, his wife Casey DeSantis, and the state Legislature. "Time is a critical factor," the text of the rule summary read. "Approximately 1 in 5 youth in Florida, and worldwide, experience mental health disorders prior to turning age 25."

The rule summary went on to note that a Florida Youth Risk Behavior Survey conducted in 2017 found that 28 percent of high school students in the state reported "feeling sad or hopeless for two or more weeks in a row" while 14 percent of students said they'd seriously considered suicide.

But mental health is a serious issue that impacts youth nationwide. According to the National Alliance on Mental Illness (NAMI), many mental health conditions first begin in adolescence. "Half of individuals living with mental illness experience onset by the age of 14," the organization states on its website. "This number jumps to 75 percent by the age of 24." In fact, NAMI has reported that one in five youths live with a mental health condition of some kind — and less than half of them are receiving the necessary services. NAMI has stressed the importance of establishing school-based mental health services nationwide.

Florida's first lady praised the state's Board of Education for passing the regulation in a statement on Twitter, calling it "an important step forward in supporting our kids and parents." She went on to say Florida was "being proactive in our commitment to provide our kids with the necessary tools to see them through their successes and challenges." Hopefully more states will follow suit soon.