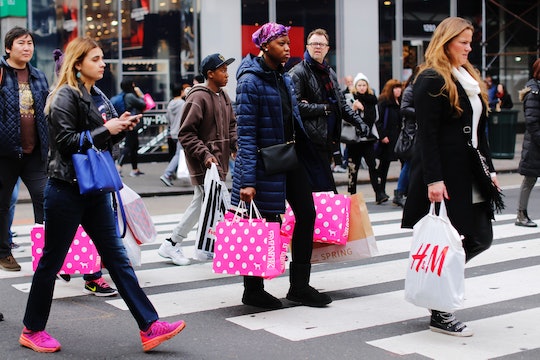 When I was a kid, Thanksgiving weekend was super special. Not only did I look forward to all the delicious food, I would anxiously wait for the Sunday newspaper which would have all the holiday store ads and catalogs, including my beloved Toys "R" Us ads. But now, thanks to Black Friday sales, you can get the scoop on all the best deals weeks in advance. So if you have all your Black Friday shopping planned out, and are set to head out before or after your turkey dinner, you should know what stores are open on Thanksgiving Day 2017.

Black Friday has become more of a black weekend in recent years, and it can be hard to navigate the puzzle of which stores are open. The hysteria that surrounds the shopping holiday has caused a lot of hoopla in the past, especially with people concerned about it taking away from the sentiment of Thanksgiving Day. So some stores have changed the way they operate to better accommodate families with longer, and more convenient, shopping times and options.

This year, Target stores will be open on Thanksgiving Day, but won’t open their doors until 6 p.m. They will stay open until midnight on Thursday and reopen on Black Friday at 6 a.m. Target has some pretty amazing doorbuster deals, including an Xbox One S, $190, which includes a $25 Target gift card, urBeats headphones, $50 that are half off their original price, and $50 off of the Apple Watch Series 1, $180. These deals are only available while supplies last, so you may want to head to Target right after your turkey dinner, especially if you want to nab one of their popular doorbusters.

Walmart, a favorite Black Friday destination, is also open on Thanksgiving this year. Walmart stores will be open on Thursday starting at 6 p.m. According to AOL Finance, Walmart executives have said that they will increase availability of sale items and color code the store this year for an easier Black Friday shopping experience. Some of Walmart’s best doorbusters include a Sharp 55" Class 4K Smart TV, $298 which is $50 off the regular price, and $100 off a Playstation 4 Console, $199.

Kmart stores will open at 6 a.m. on Thanksgiving Day and close at 10 p.m. on Black Friday. Their doorbusters, which include Skullcandy Uproar Bluetooth on-ear headphones, $25 and Athletic Kid’s Puffer Jackets, $9 are only available from 6 p.m. Thursday to 2 p.m. Friday. If you miss the doorbusters, they have plenty of 40 to 50 percent off deals all weekend long.

Macy’s and Toys "R" Us will open a little earlier than the other stores on Thanksgiving. Both will open at 5 p.m. on Thursday, and Macy’s will stay open until 2 a.m. Friday while Toys "R" Us won’t close doors until 11 p.m. Friday night. Toys "R" Us doorbusters, including these adorable Baby Alive Twinkle and Tinkle Dolls, $15, will only be available from 5 p.m. to midnight on Thanksgiving Day. Believe it or not, Macy’s has a few doorbusters this year that are free (yes, free) after rebate, but they are only available while supplies last.

Tech nerds rejoice — many of your favorite spots will be open on Thanksgiving. For the first time in three years, Gamestop stores will be open this Thanksgiving with their regular store hours. Best Buy stores will open shop at 5 p.m. and will carry doorbusters like this Samsung 11.6-inch Chromebook w/Intel Celeron, $99 and a Sony 60-inch Class LED 2160p Smart 4K Ultra HD TV, $600.

There are many other stores that will be open on Thanksgiving day, including JCPenney which opens at 2 p.m., Michael’s which will open at 6 p.m., and Big Lots which will open early at 7 a.m. Most drug stores, like Walgreens, Rite Aid, and CVS, should also be open, just check in with your local stores for times. Whether you are planning to trek out before or after the turkey and pie, it’s a good idea to plan ahead and check all the local store hours, because they may differ throughout the country. Happy shopping!