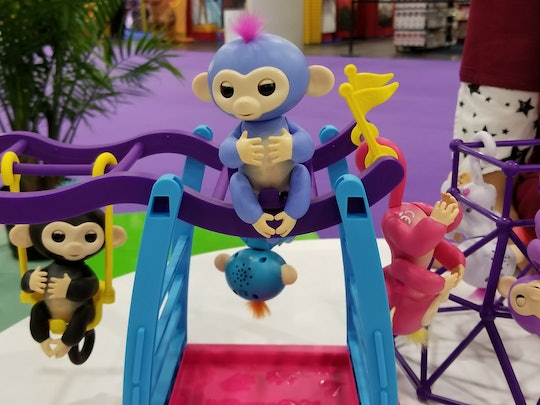 There Are A Very Few Stores With Fingerlings In Stock, So Act Fast

Parents everywhere are searching high and low for the holiday's hottest toy, Fingerlings. These adorable little monkeys have kids hooked, and stores just can’t keep them in stock. Whether you are shopping online or in store, Fingerlings seem like they are impossible to find at their regular price. So if you are not interested in paying scalpers' exorbitant prices, but would still like to get one in time for the holidays, you might want to know what stores have Fingerlings in stock.

Amazon Books stores are actual brick and mortar stores, and may have items in stock that they may be sold out of online, including Fingerlings. As of now, the stores are in seven states including California, Illinois, Massachusetts, New Jersey, New York, Washington, and Oregon, with three more coming in Maryland, Texas, and Washington D.C. So whether you live near one, or are visiting one of those areas for the holidays, it’s worth checking them out to find Fingerlings.

If you are unfamiliar with Fingerlings, and don’t know why they're so popular, consider that they are cute, tiny, interactive robotic monkeys that you can purchase for just $15. They pack so much great and easy-to-use technology in such a small, affordable, and appealing package, that parents and kids alike can’t resist them.

Fingerlings have the ability to respond to motions and voice while they cling or hang from your finger, or any other surface they can fit on. Their blinking eyes and turning heads activate when you interact with them via touch and sound. Fingerlings are fitted with two responsive sensors on their heads, and they can respond to your movement and voice with 40 different sounds and animations, including farting and burping, blowing kisses back to you, and snoring when you rock them to sleep.

At just 5.5 inches tall, Fingerlings are super easy to just throw in a backpack or pocket, so kids can take them wherever they want. The manufacturer, WowWee, has released Fingerlings as collectible toys, and the original versions come in six different characters — Bella (pink), Boris (blue), Finn (black), Mia (purple), Sophie (white), and Zoe (teal). There was also an Amazon exclusive Fingerling called Rose, which had a glitter finish, but there is no assurance as to which Fingerlings Amazon Books stores will have in stock.

I didn’t even know that Amazon had book stores until recently. According to Amazon, the book stores are an extension of the website, where they carry a selection of books based on customer ratings, sales, and popularity. The website further mentioned that the stores also carry various Amazon exclusives including Kindle devices, Echo devices, Fire Tablets, and Fire TV devices, along with Amazon.com Gift Cards.

It’s nice to know that these new Amazon Book stores are stocking popular items and toys like Fingerlings. They sell out super fast online due to bots and scalpers purchasing them all at once to sell them for higher prices. You can buy Fingerlings from resellers on Ebay and Amazon for two to three times the price, which sucks both for your wallet and in principle. Although it might be a struggle, you may get lucky by checking stores and websites for Fingerlings stock with stock tracker sites like NowInStock or Zoolert.

But if you are within driving distance of an Amazon Book store, you might be in luck. So, if you are planning on trekking out, make sure you hurry, because these Fingerling monkeys can climb out of reach faster than you might think.